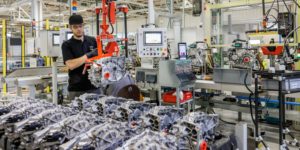 Renault has commissioned a new production line for electric motors at its Cléon plant. Initially, the ‘ePT-160kW’ will be produced here, which will be used in the Megane E-Tech Electric and will also power a future Renault C-segment model.

Production capacity is initially 120,000 motors per year and could be doubled to 240,000 units in the future. The €620 million investment in the plant, following the creation of the ElectriCity cluster, is further evidence of the Renault Group’s determination to make France a global centre of excellence for electric mobility, the statement said.

The next expansion steps have already been set: from 2024, production in Cléon will be expanded to include the ‘ePT-100-kW’ motor for the electric Renault 5 and, from 2027, a new-generation electric drive systems with 200 kW of power, which does not require rare earth metals and is being developed in partnership with Valeo. Specifically, Valeo is developing and manufacturing the stator, which should have a higher copper density and thus contribute to better power output.

Back to Cléon: when production of the 100 kW engine for the Renault 5 starts there in 2024, total production at the plant with the existing lines is expected to rise to over one million units. Specifically, Renault mentions 500,000 powertrains for electric cars and 510,000 hybrid engines in the announcement.

“Cléon is the perfect example of the group’s industrial transformation towards the electric vehicle and its entire value chain, involving our employees, our social partners and our local stakeholders,” says Jose Vicente de los Mozos, Renault group industrial director. “Another future electric motor, developed jointly with Valéo, will also be assembled here and will reinforces the Renault Group’s commitment to the Cléon plant and its desire to base its activities in France.”