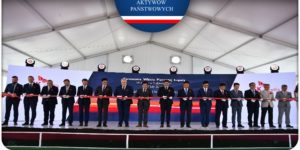 SKC, a chemical company belonging to the South Korean conglomerate SK Group, has started building a factory in Poland for copper foils for use in electric vehicle batteries. Another plant in North America is being planned.

The plant in the southern Polish city of Stalowa Wola is scheduled to start operation in the second half of 2024 and will offer a production volume of 50,000 tonnes per year. The total investment of SKC and its wholly-owned subsidiary SK Nexilis, which specialises in the production of copper foils, is stated at 900 billion won or about 693 million euros.

A later expansion to 150,000 tonnes per year is possible: SKC has secured sufficiently large areas in the industrial park, according to reports surrounding the laying of the foundation stone. However, a possible timetable for the expansion is not mentioned.

Copper foils are used – along with aluminium foils – as carrier foils in electrode production. For the anode, for example, the copper foil is coated with graphite. The copper foil is extremely thin, the Korea Times states “one-fifteenth of a human hair”.

The plant in Stalowa Wola is said to be located “close to the major global manufacturers of lithium-ion batteries”. SK on, a battery cell manufacturer belonging to SK Group, has its European battery plants in Hungary, while LG Energy Solutions operates a large battery plant near Wroclaw – also in southern Poland but further west.

SK Nexilis plans to greatly expand its production capacity for battery-grade copper foils in the coming years. Including the factory in Poland, a capacity of 250,000 tonnes worldwide is to be reached by 2025. In addition to the existing plant in South Korea, a plant in Malaysia has been under construction since July 2021, which should also reach 50,000 tonnes. Another plant with the same capacity is to be built in North America – but a concrete location is not yet known.