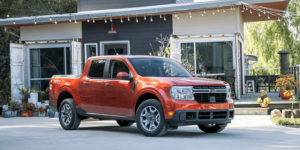 After the F-150 Lightning, Ford is also planning electric variants for its smaller pickup trucks Maverick and Ranger – also in Europe. Ford has registered the model names “Maverick Lightning” and “Ranger Lightning” with the European Trademark Office.

In the USA, interestingly, there are different names, Maverick Thunder and Ranger Thunder, as the EV news website Electrek writes. This would mean that Ford would deviate from the Lightning designation for its electric pickups in the USA. At the same time, Ford has also registered the name “F-150 Thunder” for the F-150 – possibly indicating a different model version.

The Maverick is Ford’s smallest pickup model in the internal combustion range, measuring 199.7 inches or 5.07 metres long (Ranger: 5.35 metres, F-150: 5.88 metres). While there is no further info on a possible electric Maverick yet, the Ranger is a different story: the electric Ford Ranger is reportedly being developed together with an electric version of VW Commercial Vehicles’ Amarok.

This means that the Ranger will also be built in South Africa as Ford’s “global” pickup, as reported in April this year. The Ranger is often recognised as Ford’s international pickup because it is generally the only consumer pickup truck that Ford offers in markets outside North America. The F-150 and Maverick, on the other hand, are primarily designed for North America and are therefore also built and developed there. The registration of the Maverick Lightning at the European Trademark Office may or may not indicate a change in strategy.