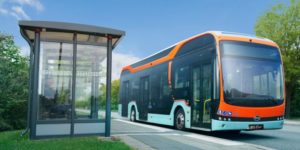 BYD has just revealed another electric bus order from Spain. Empresa de Blas y Cia, the Spanish subsidiary of the German rail transport company Arriva, has ordered 15 electric low-floor buses from BYD, twelve of which are 12-metre and three 13-metre vehicles. They are to be used in Alcorcón, a suburb of Madrid, from 2023.

Although the city of Madrid is already sporting a number BYD buses, this is the first order on the Iberian Peninsula for BYD’s electric 13-metre buses. Arriva is responsible for the deployment of the new electric buses, which will be the company’s first BYD order. The three 13-metre vehicles will mainly run several intercity routes from Alcorcón and Mostoles to Madrid.

The ordered buses are characterised by a number of new features: For example, the 12-metre low-floor electric buses feature BYD’s new lithium iron phosphate (LFP) technology, whose 422-kWh battery is said to provide a range of 300 kilometres on a single charge. This is likely to mean the latest generation of BYD’s “Blade Battery”, i.e. an LFP battery with large-volume cells that was introduced in 2020. In addition to features such as ambient lighting, USB charging ports and soundproof flooring, a newly developed safety glass is installed around the driver’s cabin.

The 13-metre-long, low-entry electric buses are also powered by LFP batteries that the Chinese manufacturer says will be the next generation. A 6-in-1 controller is said to integrate the entire ecosystem of the buses, improving reliability and maintenance efficiency. The model also has a reinforced interior structure and an intelligent warning system.

BYD says that more than 200 of the company’s electric buses are now on the roads or on order in Spain and Portugal. Just last month, BYD announced its first order for 18-metre-long articulated electric buses from Spain. The public transport operator Moventis ordered four of the electric articulated buses as a new customer, which will be delivered at the end of 2022 and will be used in the Vallés Occidental area near Barcelona.

B-On finds US distributor for StreetScooter vans in CBS