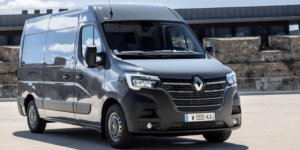 Renault Group has made official a partnership with Phoenix Mobility. The start-up works with the French carmaker at the Re-factory in Flins to retrofit Renault Master vans. This will enable Renault to turn a combustion engine commercial vehicle into electric power and is part of a larger strategy at Flins.

At a roundtable with journalists last night, Renault announced the partnership and then added the first numbers that they confirmed today. Together with Phoenix Mobility, they will retrofit 1,000 conventional Master vans to ZEVs in 2023.

This is to serve as Proof of Concept during the current co-development phase to demonstrate the benefits to commercial clients. Eventually, Renault will extend retrofitting to other models. At present, however, they will assemble the kits in Flins; Phoenix Mobility will oversee the commercial operation bringing in expertise as a recognised operator in the B2B retrofit market, Renault.

François Delion, After Sales Director of Renault Group, said the project was “fully in line with Renault Group’s strategy to make the Re-Factory in Flins the first site dedicated to the Circular Economy of mobility.”

This echoes the press call. Not unlike Renault’s ElectriCity cluster for electric car production in northern France, Flins is to become a hub, this time for the circular economy. “This requires many skills that we don’t have in Renault as a manufacturer,” Jean-Philippe Billai, Refactory Director, admitted yesterday. “So we need partners and investors to finance this ecosystem.”

The Executive was also clear that the decision to retrofit was answering a growing need since van customers soon won’t be able to enter cities anymore due to emission restrictions. Flint is near Paris.

Renault also offers the Master as an all-electric vehicle from the start but suggests that retrofit pricing may be advantageous.

At the Flins Re-factory, retrofitting is but one of four pillars, with Renault adding Re-energy, Re-cycle, and Re-start. Re-cycle concerns spare parts, not batteries, however. This enters second and third life scenarios as part of Re-energy. Lastly, Re-start is essentially a reskilling initiative through which Renault wants to train staff and external students in the circular economy.

As for Re-trofit, commercial vehicles is a new branch. At present, Renault is also refurbishing passenger vehicles in the Used Car Factory and says it has accelerated processing from 21 to ten days and aims for eight. So far, the company has made 12,000 vehicles fit for resales through the dealer network in the Greater Paris region. Billai called the used car market “very dynamic and linked to the rental activity.” Taking the example of a Zoe EV, he added that these cars sometimes sold before they even left the Re-factory since Renault enables dealers to upload images for online sales as soon as the vehicle has come off the line.

Iveco plans to use Hyundai’s fuel cell systems for buses