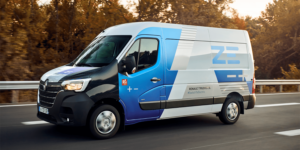 The Master Z.E. is available in three types – van, chassis and platform chassis – as well as eight versions, which can be combined through a choice of three lengths and two heights. The model was first presented at the beginning of 2017, and the electric Master has been on sale since September 2018, having already received a visual refresh the following year. Until now, the 33 kWh battery had a maximum range of 120 kilometres according to WLTP. The battery update that has now been announced should double the radius of the electric transporter – to the above-mentioned 244 kilometres in the WLTP city cycle.

Another new feature is that the Master Z.E. will be “fast-chargeable”; up to now, a maximum of 7.4 kW AC has been available. From spring onwards, the model will be able to be “fast-charged to 80 per cent in two hours and fully charged in just three hours”. The French do not mention the specific charging capacity at this point. Nor do they say whether it will be DC or AC. Instead, they emphasise that the new battery is guaranteed for eight years or 160,000 kilometres.

The French do not give any details about the construction and integration of the larger battery. It remains to be seen whether Renault will use different cell chemistry, pack more modules into the battery system, change the battery cell supplier or whether the required installation space will affect the load volume.

The fact is that the other specifications in the Master Z.E. datasheet remain unchanged: the Master Z.E., which has a permissible gross weight of 3.1 or 3.5 tonnes depending on the variant, is powered by an electric motor with an output of 57 kW. Torque: 225 Nm. Top speed: 100 km/h. It joins a wide range of Renault electric commercial vehicles, including the 16-tonne D Z.E., the 19-tonne D Wide Z.E. and the 26-tonne D Wide Z.E.

Like its diesel counterpart, Renault Trucks is also marketing the electric Master under its Red Edition commercial vehicle brand. This is accompanied by a service tailored to transport companies. Keywords here are maintenance and repair, breakdown service and the provision of replacement vehicles.