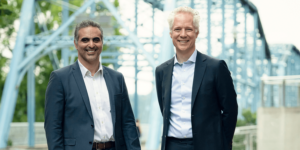 The Volkswagen Group is reorganising its management team for the planned electric offensive in the USA. There will be a change of chief at Volkswagen Group of America: the current CEO Scott Keogh will personally take over responsibility for the new electric brand Scout.

In May, VW decided to develop and sell all-electric pickups and “rugged” SUVs for the US market under the Scout brand. Scott Keogh, currently and CEO of Volkswagen Group of America, will become President and CEO of Scout on 1 September. Scout is to be run as an independent company, i.e. not just as a pure sales organisation.

By the end of the decade, Volkswagen Group brands aim to offer more than 25 BEV models to American consumers. The new management structure is expected to accelerate Volkswagen’s growth strategy in the US, according to the group’s statement.

“Scott and Pablo have played key roles in turning around the businesses in North America and South America, respectively. In their future positions, they will be pivotal in seizing the historic market opportunities in the U.S., taking our growth strategy in the region to the next level,” Group CEO Herbert Diess said of the appointments.

The two North American managers themselves are not mentioned in the company’s press release. They are each credited with having made the company profitable again in their regions after years. Keogh also accompanied the group’s electric vehicle offensive and was largely responsible for the introduction of the VW ID.4 and, still in his time as North America boss of Audi, of the e-tron on the North American market. Di Si’s responsibilities in Latin America included launching new products specifically tailored to the needs of the region.

Porsche updates the software across all Taycan models