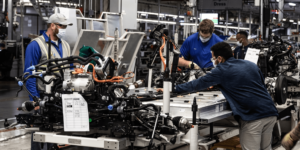 The Volkswagen Group has revealed its electrification strategy for the US market. The manufacturer wants to launch more than 25 new electric models in the USA by 2030 and achieve an electric vehicle share of 55 per cent of its US vehicle sales. The German carmaker also plans to build its own cell factory in the USA.

Volkswagen’s electric vehicle offensive in the US will begin this year with the VW ID.4 produced in Chattanooga (ID.4s delivered in the US to date have been built in Zwickau), followed by the ID. VW has not yet been very specific about the upcoming electric SUVs but it is considered certain that they will be positioned above the ID.6, roughly comparable to the VW Atlas built in Chattanooga. The 25 EV models announced apply to the whole Group, which also includes other brands active in North America. VW has not yet said which brands these are and how the 25 models will be distributed.

Instead, Scott Keogh, CEO and President of Volkswagen Group of America, announced that Volkswagen would start phasing out petrol-powered vehicles from its American range – with the aim of phasing them out at the beginning of the next decade. So by the early 2030s, Volkswagen should be all-electric in the US. That would be a big step since for 2030 itself, as mentioned, the plan is still for an electric share of 55 per cent.

The background is that the conversion of production facilities must be completed by then. According to Keogh, 90 per cent of the VW portfolio for North America is also built in North America. Production of the first MEB model is to begin with the ID.4 at the Tennessee plant this year but will then be extended to the other plants in due course.

Volkswagen also plans to convert its plants in Mexico, the car factory in Puebla and the drive plant in Silao, for the production of electric cars or components such as electric motors by the middle of this decade. The Tiguan, Taos and Jetta models are built in Puebla.

VW wants to further strengthen the regional orientation of the US models, not only in production: by 2030, important design and construction responsibilities for the body and interior will be localised in North America. The “vehicle hat”, adapted to local wishes, will then be based on the standardised drive platform of the MEB or the group’s other EV platforms (such as the upcoming SSP).

The standardised drive platform will be equipped with locally manufactured battery cells in the future. VW is purchasing cells from SK Innovation to start production of the ID.4. In the current press release, the group announces that it is aiming to set up battery cell production in the USA. A decision is to be made before the end of this year, and the group is currently evaluating “governance and financial models” around the planned battery factory, which will not only produce for the VW brand.

The new Battery Engineering Lab (BEL) in Chattanooga is scheduled to start operations in May, where batteries for electric cars will be tested and validated. On the research side, the Centre of Excellence (CoE) NAR Battery with locations in Belmont, California, and Chattanooga will gather know-how and research capacities in battery cell technology. The CoE works closely with technology partners Quantumscape and 24M.