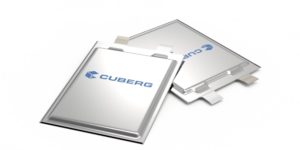 Northvolt’s Advanced Technology Group, i.e. the acquired company Cuberg, has achieved a breakthrough in the next generation of lithium metal cells, according to external tests. These are to be used primarily in electric aviation.

With the round of performance tests now complete, Cuberg has shown that it has made a breakthrough in overcoming the long-standing challenge of achieving long cell life in a lithium metal cell, according to Nothvolt. The Swedish company had acquired the US start-up in March 2021.

Specifically, third-party validation had shown that a 5.1 Ah battery cell from Cuberg with an energy density of 380 Wh/kg had achieved a lifetime of 672 cycles. In other words, the cell was charged and discharged 672 times before the energy content dropped to 80 per cent of the original value – the value that is generally accepted by the industry as the end of the first lifetime of a cell. After that, the cell can still go into a second-life application before recycling.

According to the release, the cell was tested “under conditions typical of real-world requirements, including ambient temperature”. “Overall, the results demonstrate the world’s highest performing and longest lasting lithium metal cell independently validated in a commercially representative cell size,” Northvolt said.

“Cell cycle life is a key performance criterion for a battery, impacting a wide range of priorities for our customers. While the energy density of lithium metal cells vastly exceeds that of conventional lithium-ion cells, low cycle life has historically limited the appeal of lithium metal cells,” said Richard Wang, founder and CEO of Cuberg. “The latest results confirm that Cuberg’s lithium metal technology can fulfill all key performance requirements for the most demanding mobility applications.”

However, the 5.1 Ah cell is not yet at the level that the company believes customers should receive. According to Northvolt, Cuberg’s next step will be to develop and validate a 20 Ah cell “intended as a commercial format for its aerospace customers”. Cuberg had expanded its production facilities in San Leandro, San Francisco Bay Area, after the acquisition by Northvolt, and had demonstrated with the facilities that the lithium metal cells could be manufactured using the same production processes as current lithium-ion batteries.

In addition, Northvolt and Stora Enso have entered into a development agreement to develop a sustainable battery with an anode made using lignin-based hard coal from Nordic forest wood. Stora Enso will provide its lignin-based anode material, Lignode, which is sourced from sustainably managed forests, while Northvolt will drive cell design, production process development and technology scaling.

Lignin is a plant polymer found in the cell walls of dryland plants. Trees are 20 to30 per cent lignin, where it acts as a natural and strong binder. It is one of the largest renewable sources of carbon anywhere, according to the release. Stora Enso’s pilot plant for bio-based carbon materials is located at its Sunila production site in Finland, where lignin has been produced industrially since 2015. The annual lignin production capacity is 50,000 tonnes, making Stora Enso the largest kraft lignin producer in the world.