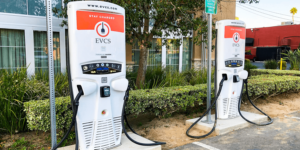 Tritium has announced a follow-up order from EVCS that added 300 fast-chargers to an existing deployment of 500 50-kW columns. EVCS is among the largest CPOs on the West Coast and will deploy the 300 chargers across California, Oregon, and Washington.

“EVCS is excited to expand its partnership with Tritium to install more than 300 Tritium DC fast chargers on the West Coast by mid-2023,” said Gustavo Occhiuzzo, CEO and founder of EVCS. The company opted for the Tritium RTM charging station delivering 50 kW.

Tritium and EVCS have been working together since November 2021, then announced the rollout of over 500 DC fast chargers to EVCS’s network. In today’s statement, they said that many of these have already been installed as a part of the West Coast Electric Highway upgrade.

Drivers can pay through the EVCS mobile app, Apple Pay, Google Pay, a credit card, or by becoming monthly subscribers with unlimited charging for a monthly fee.

Now EVCS will install the new fast chargers in high-traffic areas, including retail locations, transit centres, underserved communities, and near highways and tourist centres, so the company.

“EV charging infrastructure is growing at an unprecedented rate in the US, and it’s critical that this rollout provides drivers with equitable access to public fast charging,” said Tritium CEO Jane Hunter.

EVCS plans to extend service to more than 35 new cities across California, Oregon, and Washington and increase charger density in existing EVCS communities. By late 2023, the network could grow to 1,500 chargers. Earlier this month, EVCS announced a new raise of $68.8 million that will go toward helping the company expand its charging network services throughout the West Coast.

As for Tritium, the Australian company will open its largest factory in Tennessee, as reported in Q3/2022. Also, Tritium has recently closed significant deals with BP, Osprey or MFG pit stops in the UK.

Founded in 2001, Tritium now lists on NASDAQ under DCFC; DCFCW.