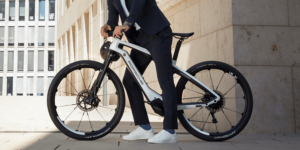 The e-bike joint ventures launched by Porsche and Ponooc (part of Pon) are gaining traction. The partners announced that Porsche eBike Performance GmbH and P2 eBike GmbH began business. You may expect to see Porsche-branded e-bike drives across many labels in future.

Porsche eBike Performance GmbH, based near Munich, will develop whole e-bike systems comprising motors, batteries and software for connectivity. Stuttgart-based P2 eBike will then use these systems to launch a new generation of Porsche eBikes. However, the company also envisions selling to third-party bike manufacturers from around 2025.

“We see great potential for Porsche in the eBike segment,” said Lutz Meschke, Deputy Chairman of the Executive Board of Porsche AG.

Following the JV announcements in February, the company now appointed Jan Becker, former CEO of Porsche Lifestyle, as chairman of Porsche eBike Performance GmbH. His counterpart at P2 eBike GmbH will be Moritz Failenschmid, who is also the Managing Director at Focus Bikes.

Focus is but one brand of Ponooc. Their portfolio includes Gazelle, Cervélo, Urban Arrow, Santa Cruz, Kalkhoff, Cannondale, Schwinn, and CALOI. Pon, as a part of Pon Holdings, a Dutch trading and service company, claims these bicycle brands have delivered 710,000 bikes globally, of which over 60% were electric.

These will complement the range of systems of Porsche eBike Performance GmbH. Porsche expects to distribute both product categories under their name to e-bike manufacturers worldwide in the future, with the newly founded joint venture acting as a technology partner. The electric drive systems will therefore be used in Porsche eBikes as well as in the products of other brands. Whether these are exclusive to Pon brands is open at this stage.

Independent of the joint ventures, Porsche wants to continue working with Rotwild on its current Porsche eBikes. The sports car manufacturer also owns a majority stake in the Croatian eBike brand Greyp.