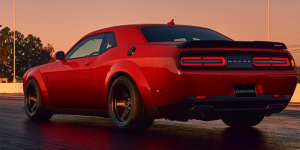 In the USA, Dodge wants to launch the first ‘electric muscle car’ in 2024, as has been known since the presentation of the Stellantis electric strategy last year. According to the Motor1 report, it will be presented as a concept car in the coming weeks.

Previously, there had already been speculation about the electrification of Dodge products. In June 2021, a report by the portal The Detroit Bureau said that the company was working on an electric car. This would be one of at least six BEVs and several plug-in hybrids to be launched under brands of the former FCA group (now Stellantis), it said at the time.

Mini rumoured to be considering cooperation with Canoo

BMW plans electric sedan and SUV for the ‘Neue Klasse’