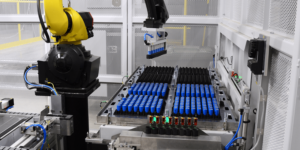 AMTE Power says that Dundee now was its „preferred site“ for its battery cell production. The proposed „MegaFactory“ at the Michelin Scotland Innovation Parc (MSIP) would ensure the business can rapidly scale up, so the company. Financing remains uncertain.

The British prospective battery maker announced plans to come to Scotland in February 2021. At the time, Teesside was also in the running, and AMTE said a decision would be made in 2022 as to expansion from its existing production facility in Scotland. They would also “welcome any mutually beneficial collaboration,” a spokesperson told electrive back then.

Over a year later, a preference has been set with some official support for Dundee. AMTE Power says it discussed with Scottish Enterprise to help bring the development forward.

Councillor John Alexander, leader of Dundee City Council, said the plans were “an exciting proposal.” He added, “We look forward to working closely with local and national partners to help progress AMTE’s plans and secure this major investment in Dundee,” meaning the decision is still not definitive.

AMTE Power beholds, however, the MSIP site was “perfectly suited for a battery MegaFactory with a highly skilled, local workforce, onsite renewable energy, commitment from the Scottish Government for net zero manufacturing and good transport links.”

The company that used to speak of a Gigafactory today also clarified that “MegaFactories” were smaller than Gigafactories. In their case, the company proposes fitting an existing building at MSIP to host AMTE Power’s 0.5 GWh plant. It could be operational and produce battery cells by the third quarter of 2025, so AMTE.

The Dundee site would complement their existing facility in Thurso, Caithness. The company claims “high levels of interest in its cells from customers in the automotive and energy storage markets” without naming any.