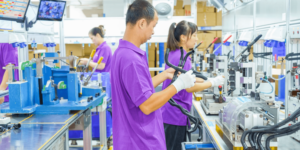 The Norma Group has commissioned a fifth plant in China. The site is located in Guangzhou in Guangdong Province in southern China, strategically close to Guangzhou Automobile Group (GAC) and other electric vehicle manufacturers.

At the new plant, the Norma Group intends to manufacture and assemble thermal management systems for BEV and PHEV vehicles, the company writes. The plant is expected to produce up to five million parts per year for OEM customers. At the current stage of expansion, the capacity of the facilities on the Datang Auto Technology Park site is two million parts per year. The supplier plans to create more than 100 jobs in Guangzhou by the end of the year.

Organisationally, the new Guangzhou site is a branch of the Norma Group plant in Qingdao in East China (Shandong province), which has been in operation since 2008 and is running at full capacity. The German supplier, headquartered in Maintal near Frankfurt am Main, operates five production sites in China, two for metal hose clamps and pipe clamps and three plants for plastic products such as connectors, line pipes and complete fluid systems.

“China is the largest manufacturer of new-energy vehicles in the world. More than one third [of] all battery-electric and hybrid vehicles come from production sites in China, either by national OEMs or by joint ventures,” says Michael Schneider, CEO of Norma Group. “With the new plant in Guangzhou, we are further expanding our market position through a targeted investment according to our localization strategy. By offering our products and services where the demand is, we can provide efficient logistics, improved shipment costs and engineering services close to the customer.”

Speaking at the opening of the new site, Michael Eisner, China Country Leader responsible for Norma Group’s business activities in China, said, “We already see and expect further increase in demand for advanced joining technology for electric vehicles. With our significantly expanded production capacities in China, we are well-positioned to serve the Chinese customers as they continue to drive the technological transformation of the transport sector.”

Currently, the plant is supplying wiring systems as part of customer orders already booked. Series production for other customers in the region is in the pipeline, the company said. The company said in another statement that Norma Group has received two major orders from unnamed car manufacturers in China worth a total of around €5.6 million. The company will supply thermal management systems for electric passenger cars. Under the contracts, around 350,000 electric cars for the Chinese market will be equipped with Norma Group systems by 2029.

In 2021, the Norma Group generated sales of 173 million euros in the Asia-Pacific region, which corresponds to 16 per cent of Group sales.