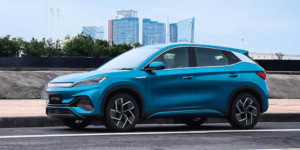 564,000 new energy vehicles were sold in China in July. This is 7,000 fewer than in the previous record month of June 2022, but NEV sales more than doubled compared to the same month last year.

Following December 2021 (505,000 units) and the record-breaking June with its 571,000 NEV sales, July 2022 was only the third month in which more than half a million New Energy Vehicles (BEV, PHEV and FCEV) were sold in China. The 564,000 NEVs represent a decline of 1.23 per cent compared to June, which is remarkable in times of volatile supply chains.

In addition, the sales tax for some internal combustion vehicles has been halved since the beginning of June, which is why experts had expected a larger shift towards internal combustion vehicles. The China Passenger Car Association (CPCA), which publishes the sales figures, attributes the steady NEV sales to improved supply as well as the expectation of higher oil prices – consumers are probably not fooled by the lower acquisition costs for small combustion cars in the short term.

Of the 564,000 New Energy Vehicles, 428,000 were equipped with an all-battery electric powertrain – a 76 per cent share in July. Plug-in hybrids accounted for 136,000 units in July, while fuel cell vehicles continue to make up only very small numbers.

In the current year, wholesale sales of new energy vehicles in China will thus total 3.03 million units, which corresponds to an increase of 123 percent.

Among the manufacturers, BYD is in the lead, as is now customary – both in the NEV and the pure BEV evaluation. For the manufacturer, which plans to deliver its first e-vehicles in Sweden, Germany and Israel this year, July was a new record month with 162,214 New Energy Vehicles. BYD sales are split between 80,991 BEVs and 81,223 PHEVs – a ratio of 49.9 to 50.1 per cent.

Tesla sold only 28,217 electric cars in July, a significant drop from the 78,906 units sold in June. However, this was to be expected: the reason for the sharp decline is the conversion work at the Tesla plant in Shanghai, which led to interruptions in production. Of the 28,217 Tesla vehicles sold in July, 19,756 were exported.

Among the Chinese BEV start-ups, Neta was ahead in July. The company sold 14,037 battery-electric cars, of which as many as 1,382 were exported. For Leapmotor, July was a record month with 12,044 BEVs. Behind them, Xpeng remains in five figures with 11,524 sales, while Nio remains just shy of five figures with 10,052 vehicles – but that’s still for the second month in a row.

Also worth mentioning is Geely’s Zeekr brand, which also set a new record with 5,022 sales of its 001 e-sedan, the first time sales have exceeded 5,000 vehicles. The previous record came from May with 4,330 vehicles. As a reminder: Zeekr has not even been on the market for a full year, the first vehicles were delivered in October 2021 – just 199 at the time.