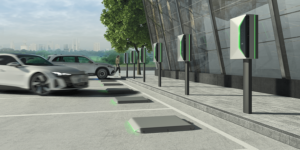 Siemens and Mahle have signed a letter of intent to collaborate on the inductive charging of electric vehicles. However, rather than developing technology, both companies intend to coordinate efforts in harmonisation.

The plans also call for “a close exchange of ideas” to develop a complete inductive charging system for electric vehicles.

However, for the time being, both partners will use their respective equipment for “extensive interoperability and cross-testing,” Siemens reveals. This affects the charging equipment on the vehicle (secondary coil) and the charging infrastructure (primary coil). Siemens hopes this will allow for technical improvements and validation of inductive charging systems and ensure interoperability.

The company also mentions publicly funded projects so that Siemens and Mahle may rely on partners and the state to co-finance the testing and standardisation.

“Wireless charging of electric vehicles is emerging as a major market for the future,” said Stefan Perras, Head of Pre-development and Innovation for Charging Infrastructure at Siemens. “In addition to making life considerably easier for drivers, who no longer have to fiddle with cables and connectors, it is a crucial requirement for the autonomous mobility of tomorrow,” he said.

Both companies are, of course, already in the field—Mahle as an automotive supplier and Siemens in the area of charging infrastructure.

Both companies are also a licensee of WiTricity, as reported. As with Mahle, Siemens intends to work with the wireless charging start-up on harmonisation, this time globally. They also want to collaborate on the technical development of wireless charging systems.

The “ultimate goal” so Siemens was to “accelerate the maturing of wireless charging technologies together with OEMs and infrastructure partners” to ensure their cost-effective availability worldwide simultaneously.