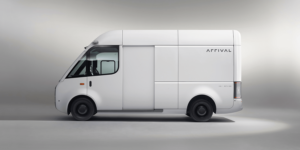 In its latest quarterly report, the British electric vehicle start-up Arrival has confirmed the recently leaked strategic realignment, according to which the company will fully concentrate on the launch of its electric transporter for the time being and put its bus and car project on the back burner.

In early August, the Financial Times had reported, citing insiders, that costs would be cut by a third. As a result, the car project had been paused, but could be revived later. The bus project had also been put on hold and tests with potential customer First Bus had been postponed.

As the company itself now states, it wants to start producing electric transporters in the course of the third quarter of 2022 at its plant in Bicester, England, and deliver the first 20 or so to UPS before the end of this year. Arrival had originally expected to deliver 400 to 600 vehicles in 2022.

The start of production at Arrival’s US micro-factory in Charlotte, North Carolina, will be postponed from the third quarter of this year to 2023. The electric truck for UPS is also to be manufactured there.

While the company’s second-quarter loss widened to $89.6 million from $56.2 million in Q2 2021, Arrival said it no longer expects to generate significant revenue this year because of its sharply curtailed production plans. “We are switching from the mode where we have two products, two shifts and two micro factories to the mode where it’s one factory, one shift, one product,” CEO Denis Sverdlov said during a call with analysts. “We believe that this opportunity to switch gives us better chances to be successful.”

In the announcement accompanying the quarterly figures, it sounds quite different. It said it had “recent strategic decisions that will allow us to start production this quarter in Bicester (UK), deliver our first vehicles to UPS this year, and start production in Charlotte (US) in 2023”. When production starts in the first micro-factory, it will be a moment “that we believe will fundamentally change the automotive industry”, Sverdlov is quoted as saying.

Foxconn to build electric tractors for Monarch in the USA