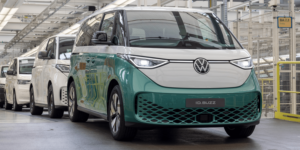 Volkswagen Commercial Vehicles has prepared the first areas of production at its plant in Hanover for future variants of the ID. Buzz. The modernisation measures at the plant were carried out during a three-week summer break.

The specific variants, according to the statement, involve the ID. Buzz with a long wheelbase, which VWN plans to produce in Hanover from next year, then also for the North American market. However, VWN has not yet revealed any technical details about this variant.

The currently built five-seaters and cargo version are 4.712 metres long and have a wheelbase of 2.988 metres. The long version will then also be offered as a seven-seater with a third row of seats. It is not known whether the stretched wheelbase will also allow for a larger battery. Earlier, a version with up to 111 kWh was also announced for the MEB. The currently largest version of the power storage unit (also in the ID. Buzz) comes with 82 kWh gross and 77 kWh net.

The conversion work during the summer break not only affected the ID. Buzz, but also the new Multivan T7 and the T6.1. According to VWN, the total of 550 measures implemented have made production planning more flexible. This makes it possible to react even faster to market demands. The coordination between the ID. Buzz, ID. Buzz Cargo, T7 and T6.1 is very important, because in some production sections all four models share one production line.

Series production of the ID. Buzz started at the beginning of June 2022, but already had to be interrupted briefly at the end of the month. For the ID. Buzz, VW relies on battery cells from a different supplier compared to the MEB production in Zwickau. Some of the new cell modules did not deliver the desired performance. After about a week, production had restarted.

“Traditionally, we use the holiday corridor to carry out very extensive work on the plants or to rebuild complete areas,” says plant manager Thomas Hahlbohm. “This summer we carried out modernisations in many places in the plant, but also optimised some processes again.”