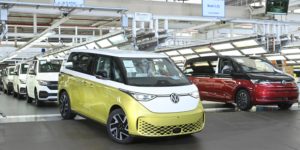 Volkswagen Commercial Vehicles has started series production of the all-electric ID. Buzz at the main plant in Hanover. This year, up to 15,000 units of the ID. Buzz Pro and ID. Buzz Cargo will be produced.

After the ramp-up, up to 130,000 vehicles per year can be produced in Hanover in the future, according to VWN. With such quantities, the MEB van would be one of the most important models of Volkswagen Commercial Vehicles. VWN CEO Carsten Intra also states in the production launch announcement that the ID. Buzz would become “a supporting pillar for the utilisation of the factory” in Hanover.

VWN had presented the series version of the ID. Buzz at the beginning of March – as a five-seater for private customers and as a cargo variant. Initially, there is only one drive: the 150 kW rear engine in combination with the 77 kWh battery. Deliveries of both variants are scheduled to start in autumn.

Sales of both models started in Germany on 20 May. In the UK, pre-booking just opened up yesterday. Accordingly, the passenger car variant ID. Buzz Pro starts at a gross list price of 64,581 euros. Deducting from this the currently still valid environmental bonus (state share of 5,000 euros and manufacturer share of 2,975 euros), the current entry-level variant still costs the end customer around 56,606 euros. The ID. Buzz Cargo, on the other hand, is listed with a net list price of 45,740 euros or 54,430 euros (gross). If the current environmental bonus is deducted, the electric transporter still costs around 38,240 euros (net) or 46,455 euros (gross).

For the ID. Buzz, the first MEB model from Hanover, the production line has been rebuilt over the past two years during ongoing operations. According to VWN, about 4,000 employees have been trained in the new model and the work processes in the past months. The latter has become particularly important because the complexity has increased considerably: Instead of virtually just one model series, VW is now producing three similarly sized models in Hanover: the T6.1, the new T7 Multivan on an MQB basis and the ID. Buzz as an MEB model.

“We are now manufacturing three ‘Bulli’ product lines with three different drive system concepts in our plant here,” says Josef Baumert, member of the VWN brand Board of Management for Production and Logistics. “This means complexity makes huge demands of our workforce.” But high hopes are pinned on the ID Buzz. “The ‘Bulli of the future’ is safeguarding jobs at our brand headquarters in Hannover,” says Stavros Christidis, Chairman of the VWN Works Council.

With the start of production of the VW ID. Buzz, the German component plants have now also started manufacturing essential tech components for the new electric van model. The plants in Braunschweig, Kassel, Salzgitter and Hanover supply the battery system, the electric drive system and the chassis, among other things. 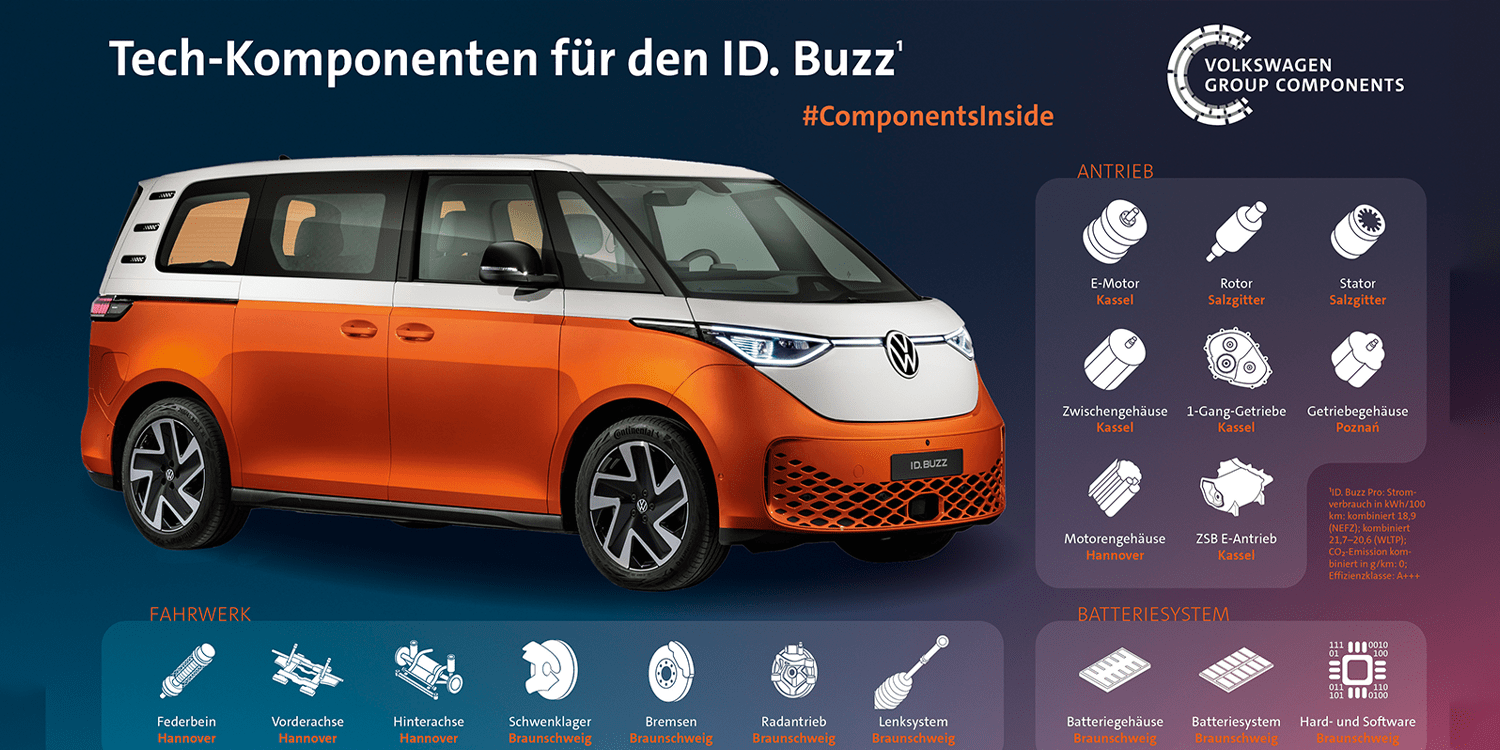 For the ID. Buzz and ID. Buzz Cargo, Volkswagen Group Components is responsible for the complete front and rear axle assembly. A new axle assembly facility was set up in Barsinghausen for this purpose: Around 200 employees from the nearby Hanover components plant will assemble the axles for the ID. Buzz. This means that the Hanover site will also be involved in producing MEB components. From 2024, the MEB battery system for the ID. Buzz, which is currently still supplied from the component site in Braunschweig. Hannover also manufactures the hardware for the development of fast-charging infrastructure for electric vehicles in the form of a flexible fast-charging column.

According to VW, the component plant in Kassel has already developed into a competence centre for electric drives. The electric drives for the MEB are produced there. With the in-house development and production of the pulse inverter for the future Group modular drive system, the location will also be responsible for the “brain” of the electric drive train in future. The Braunschweig site will develop and manufacture the battery systems and their software. The rotor and stator for the electric drive of the MEB are produced at the Salzgitter plant. The site is also being expanded into the Volkswagen Group’s European Battery Hub. In 2025, the Group’s first gigafactory will start producing battery cells there.

Volkswagen has officially opened the order books for the all-electric ID. Buzz Cargo in the UK, with prices starting from £38,125. Customers can choose between two trim levels: ‘Commerce’ and ‘Commerce Plus’, both of which are fitted with a 77kWh lithium-ion battery and a 150 kW electric motor, which delivers a range of up to 256 miles.

Lexus RX 450 gets PHEV option for the first time