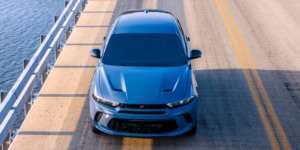 The Stellantis subsidiary Dodge has presented its first electrified model. The Dodge Hornet compact SUV is also offered as a plug-in hybrid in the R/T variant with a 15.5 kWh battery pack and more than 30 miles (48 km) of electric range.

The Dodge Hornet is based on the Alfa Romeo Tonale. The Hornet R/T plug-in hybrid features a 1.3-litre turbocharged four-cylinder engine and an electric motor on the rear axle. According to the manufacturer, the vehicle has a total output of 210 kW and a torque of 519 Nm (383 lb-ft). It is also equipped with a six-speed automatic transmission that transmits power to all four wheels.

In addition to the aforementioned battery pack, the Dodge Hornet R/T has a starter generator that transfers torque to the engine belt to help recharge the battery, among other things. The vehicle is also equipped with a ‘PowerShot’ function that provides an additional 18 kW for up to 15 seconds. According to the manufacturer, the function shortens the sprint to 60 mph (96 km/h) by one second to 6.1 seconds. The vehicle can be driven in three hybrid driving modes: a standard hybrid mode, an electric mode and a power-saving mode.

“The Dodge brand’s electrified transformation has left the starting line, with the all-new Dodge Hornet R/T representing the first electrified performance vehicle from Dodge,” said Tim Kuniskis, chief executive officer of the Dodge brand. “The Dodge Hornet is ready to shake up the mainstream compact utility vehicle segment with a look, feel and performance that are unmistakably Dodge.”

Almost simultaneously with the announcement of the new model, Dodge has also confirmed it will discontinue its Charger and Challenger models with the 2023 model year. “We are celebrating the end of an era — and the start of a bright new electrified future — by staying true to our brand,” Kuniskis added. The next generations of the Charger and Challenger, expected from 2024, will reportedly be launched exclusively with battery-electric powertrains.

Polestar to release the O2 concept as the Polestar 6