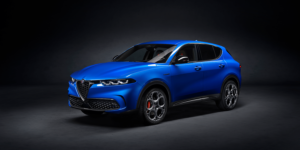 The Stellantis subsidiary Alfa Romeo has presented its first model that is primarily offered with electrified drives called the ‘Tonale’. However, the first versions are still hybrids. But that will soon be over: from 2025, all new Alfa models will be purely electric.

Since Alfa Romeo is entering electrification with the hybrid SUV, the Italian company sees the Tonale as “the symbol of the brand’s transformation”. In addition to two mild hybrid variants, the Tonale will be launched this year as a 202 kW plug-in hybrid with an electric range of over 60 kilometres.

The two mild hybrids are only 48-volt systems, but even with these powertrains, the Tonale is capable of driving fully electrically, according to the announcement. However, this is only possible at low speeds, for example when manoeuvring and parking. Alfa therefore does not mention an electric range at all. The mild hybrid is available in two versions, one with 96 and one with 188 kW. The 1.5 litre petrol engine is combined with a 15 kW electric motor.

The plug-in hybrid, which is always equipped with all-wheel drive, is considerably more powerful. With a displacement of 1.3 litres, the petrol engine here is still somewhat smaller than in the mild hybrids, driving only the front wheels. The electric motor sits on the rear axle, which is supposed to provide all-wheel drive. The system output is 202 kW, and the 4.53-metre-long SUV is supposed to accelerate to 100 km/h in 6.2 seconds.

The 60 kilometre range has been achieved in the combined cycle, while in the city cycle Alfa claims a range of 80 kilometres. This is made possible by a 15.5 kWh battery that can be charged by cable with a maximum of 7.4 kW. This distinguishes the Tonale from the smaller Jeep PHEVs Renegade and Compass (maximum 177 kW power and 11.4 kWh battery) as well as from the Jeep Wrangler 4xe, which uses a 17.7 kWh battery and achieves 280 kW system power.

While it will soon be over for the diesel also offered in the Tonale, the hybrids will be around a little longer – but not much longer either. On the sidelines of the Tonale presentation, brand boss Jean-Philippe Imparato announced that the first purely electric Alfa Romeo will come onto the market in 2024. He did not name the exact model yet, but it will be offered as a BEV and hybrid.

From 2025 onwards, Imparato says, Alfa Romeo will launch new models only as BEVs, starting with a purely electric performance model. The conversion to 100 per cent BEVs in Europe, North America and China is to be completed at Alfa Romeo by 2027.

Alfa Romeo has released UK pricing and specifications for its Tonale PHEV. The new Alfa Romeo Tonale Plug-In Hybrid Q4 is priced from £44,595 (or £445 per month) in Speciale trim, rising to £48,495 (or £545 per month) in Veloce trim. Orders are now open for the Veloce and Speciale, with first deliveries taking place in Q1.

The technical specifications remain largely the same, although the vehicle features updates technology and connectivity systems. The 15.5 kWh battery still promises an electric range of 49 miles (80 kilometres), although the manufacturer writes that the “powertrain in the Plug-in Hybrid Q4 makes it the most efficient Tonale in the range, offering the best in terms of performance and battery life”, having reduced CO2 emissions to 29 g/km and improved fuel consumption to deliver 217.3 mpg according to WLTP.

Nissan is getting ready to drop the combustion engine