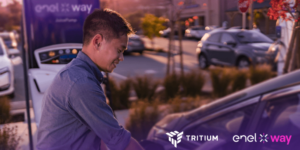 Enel X Way has ordered more than 250 fast charging stations from Tritium for use in the US. The order is part of a new framework agreement between the companies that combines Tritium DC columns with Enel X Way’s intelligent charging platform.

It is the first such contract in the US for the utility from Italy. Enel X Way hopes the deal will “deepen access” to Tritium’s fast charging hardware and software. They will use Tritium’s 175-kW fast-charger and the 50-kW RTM station to build the US network. Technologically, Enel will pair its JuiceNet software platform with the Tritium chargers.

In the US, they initially aim to install 250 charging stations. Enel X Way qualifies for more than 60 commercial utility and state incentive programs, including 30 DC fast-charging incentives.

However, Tritium and Enel X Way intend to expand their partnership in line with the US government’s programme to build a national network of 500,000 charging stations under NEVI.

Enel X Way intends to deploy Tritium’s Buy America-compliant fast chargers to meet NEVI demand. The Australian company expects to start US production of the PKM150 and RTM at its Tennessee factory this autumn. As reported, this will include up to six production lines to make up to 10,000 DC chargers per year.

Chris Baker, Head of Enel X Way North America, said the deal would enable them to expand the DC fast charging offering. He added that Tritium’s offer was “flexible, scalable, and the US manufactured, making deploying charging sites easier for businesses and cities”.

Jane Hunter, the Tritium CEO, commented, “We believe that Enel X Way is an ideal company to accelerate deployment of our charging technology, as they have entities throughout the world and are well equipped and committed to the expansion of electric vehicle infrastructure.”

Tritium says that the order is part of a framework agreement that has been concluded but leaves out details such as the term or the maximum order volume. The companies add, however, that they plan to sign additional regional contracts further to expand access to fast charging around the world.

Tritium has concluded other significant framework agreements with the oil companies Shell and BP. While the scope of Shell’s contract is also unknown, BP can order up to 1,000 charging stations, as reported.

Enel’s presence in North America goes back to the year 2000, when the company became a renewable energy generator in the United States. Here is our 2020 interview with Giovanni Bertolino, then responsible for e-mobility at Enel X North America.