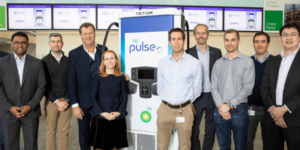 Australian charging infrastructure manufacturer Tritium has signed a multi-year contract with BP for the supply of DC charging stations and associated services. BP is placing an initial order with Tritium for almost 1,000 fast charging stations for the UK, Australian and New Zealand markets.

The charging stations will then be achieved and operated under the BP Pulse brand. So far Tritium has only made mention of the three English-speaking markets.

It is rather unlikely that the charging points will come to Germany under the label BP Pulse: In Germany, the British petroleum company is primarily active with its German subsidiary Aral, which is building its own charging network with Aral Pulse – and is primarily relying on Hyperchargers from Alpitronic. The first Aral charging stations also used columns from other manufacturers. In Germany, Tritium is best known as one of the suppliers for the Ionity network.

“I’m delighted that with this new global agreement with Tritium, it will help bp pulse deliver its mission to provide fast, reliable charging for EV drivers and to accelerate the roll-out of the charging infrastructure needed as the world transitions to decarbonise road transport,” said Richard Bartlett, Senior Vice President, bp pulse.

This is not the first global energy giant that has gone to Tritium for their DC chargers. Late last year, Tritium signed a new global framework agreement with Shell to supply DC charging stations. Tritium has been supplying Shell with fast charging stations since 2020 and was also selected in Shell’s latest tender.

“The electrification of transportation is entering an incredible era when major companies like bp are providing critical support to transition the world to cleaner more reliable transportation,” said Tritium CEO Jane Hunter. “We’re thrilled to be working with bp to create greater global access to fast charging in support of their mission to become a net zero company by 2050 and to be a leader in helping the world get to net zero emissions.”

In January, Tritium went public on the Nasdaq stock market in the United States. The very next month, the rapidly growing manufacturer of fast chargers, announced the construction of a manufacturing facility in the US state of Tennessee with up to six production lines to manufacture up to 10,000 Tritium DC chargers per year.

BP operates most of the UK’s charging stations, and has announced its own plan to invest £1 billion over the next ten years to expand its BP Pulse charging network.