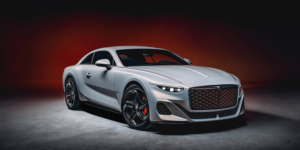 Bentley has given a preview of the future design of its battery-electric cars. However, under the bonnet of the Mulliner Batur two-door coupé model, which has now been unveiled and is limited to 18 units, there is still an internal combustion engine.

But according to Bentley, “the Batur is a showcase of a new design DNA that will ultimately guide the design of Bentley’s future range of Battery Electric Vehicles”. This means that Bentley wants to retain the large, defining radiator grille at the front for the electric cars – even if it is no longer needed in these dimensions for technical reasons. The same probably applies to the very long front bonnet of the twelve-cylinder.

The Mulliner Batur has the proportions of a classic Bentley coupé. This will probably remain so in the electric world, as can now be deduced from statements made by the management at the Batur premiere. “The Batur is a significant car for Bentley. Far more than the heir to the highly successful Bacalar, the Batur showcases the design direction that we’re taking in the future as we develop our range of BEVs,” says brand boss Adrian Hallmark, for example. “Andi Mindt and his team have reimagined the classic Bentley design cues into a stronger, bolder design that remains both elegant and graceful.”

“We have reimagined the Bentley design language, keeping some continuity to the past and present while also drastically changing key elements,” says Chief Designer Andreas Mindt. “A mark of power and prestige has always been a long bonnet. Our new design cues include a line that stretches from the bonnet along the whole length of the car, connecting the bonnet into the body, making the car long and lean and giving an elongated proportion to the front end.”

Bentley will start production of its first BEV model in 2025 at its plant in Crewe, England, and plans four more electric vehicle models by 2030. The electric Bentleys are likely to all be based on corresponding VW Group EV platforms, with the debut model being something like an offshoot from Audi’s Artemis project.

Incidentally, there is no longer any need to hope for a Mulliner Batur: All 18 examples have already been sold to existing Mulliner customers before the premiere at the Monterey Car Week in California – at a unit price of 1.65 million pounds before taxes and optional extras.