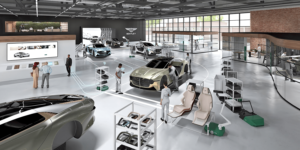 Bentley will produce its first BEV model at its plant in Crewe, England, from 2025, the luxury car manufacturer has now officially confirmed. Bentley plans to invest £2.5 billion in the site and in research and development over the next ten years, with a particular focus on sustainability.

In the course of the investments, the ‘Bentley Dream Factory’ is to be built on the historic Crewe campus. The final assembly of Bentley’s first electric model will also take place there. As reported, the bodies for the electric car will previously be built at Volkswagen’s commercial vehicle plant in Hanover. The final assembly plant was not named at the planning meeting in December. Anything other than the Crewe location would have been surprising.

Such a split had been hinted at since the autumn. Originally, the three Artemis models from Audi, Bentley and Porsche were to be built in Hanover, which would make an important contribution to securing the location. At Porsche, with its self-driving focus, interest in the platform geared towards autonomous driving was low anyway; the Zuffenhausen-based company has since bought its way out in return for a compensation payment and is planning its own electric crossover model in Leipzig.

Bentley’s interest in a luxury model from the commercial vehicle plant was also limited. With body assembly in Lower Saxony – the commercial vehicle plant is designed for long-wheelbase bodies – and final assembly in England, Bentley can still market its vehicles as British. According to the announcement, the ‘Dream Factory’ is to be nothing less than “the future benchmark of luxury car manufacturing”.

Bentley’s ‘Beyond100’ strategy calls for the VW subsidiary to become an all-electric car manufacturer from 2030. “It is an ambitious and credible roadmap to carbon neutrality across our entire business system, including moving to 100 per cent BEVs in just eight years,” said Bentley chief executive Adrian Hallmark. “Securing production of our first BEV at Crewe is a milestone for Bentley and the UK as we plan for a long-term sustainable future at Crewe.”

According to Peter Bosch, Bentley Motors board member for manufacturing, sustainability is not just about the BEV itself. “With our new ‘Dream Factory’ concept, we now go to zero also with water, waste and other environmental impacts until 2030. Unique craftsmanship, customer interaction and employee experience will be enhanced by digital tech, higher flexibility and new ways of personalisation,” Bosch said.