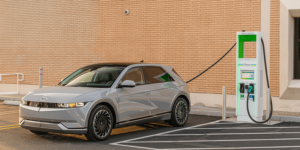 Hyundai is considering accelerating the construction of its electric car plant in the US state of Georgia – instead of 2023, the first excavators are to roll this year. The background to the considerations is the new electric car subsidy in the USA.

The new regulations signed by US President Joe Biden stipulate that electric cars built outside North America are excluded from tax incentives. Hyundai currently only makes its E-GMP models, such as the Ioniq 5 or the Ioniq 6, in South Korea – so buyers of these vehicles would miss out in the US.

Construction of the US plant in Georgia, announced in May, with an annual capacity of 300,000 electric cars, was initially scheduled to begin in early 2023 to start production in the first half of 2025. The South Korean news agency Yonhap now reports, citing an insider, that due to the reformed US tax credit for electric vehicles, construction of the Hyundai plant could begin this year – to start production in the second half of 2024. However, there is no comment from Hyundai Motor Corporation in the report.

The South Korean group has ambitious electric plans: Hyundai wants to launch 17 electric vehicle models by 2030, including six under the Genesis brand. Kia has announced 14 electric cars by 2027. Some models, such as the large E-GMP SUV Hyundai Ioniq 7 and Kia EV9, are aimed mainly at the US market. According to earlier reports, these two models will also initially be built at the new Georgia plant.

Meanwhile, Business Korea reports that Hyundai plans to produce e-cars in China next year. From the second half of 2023, Beijing Hyundai, the joint venture between Hyundai and Beijing Motors, will start making electric cars to respond to the growth of the electric vehicle market in China. Details, however, have yet to be finalised. Hyundai wants to position itself in the luxury segment in China and introduce the Genesis brand there.

Hyundai has confirmed the start of building its electric car plant with an annual capacity of 300,000 EVs in the US this month. The groundbreaking ceremony in Savannah, Georgia, will take place on 25 October, Reuters reports. EV production in Savannah is scheduled to start in the first half of 2025.

Originally, Hyundai planned to begin not until early 2023 but had considered bringing forward the building work because of the new electric car subsidy in the USA, as reported above.