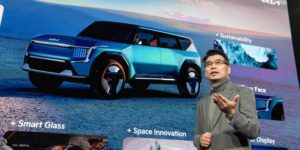 Following in Hyundai’s footsteps, Kia has now also presented its strategic roadmap for accelerating its electrification ambitions by 2030. To achieve the sales target, at least two new electric models are to be introduced each year.

The new strategy builds on Kia’s ‘Plan S’, but the sales targets are being significantly tightened up. As of February 2021, Kia’s forecasts still assumed that it would sell around 880,000 battery-electric cars in 2030. In the update now presented on the occasion of a virtual investor day, Kia assumes – based on 160,000 BEV sales this year – that it will already sell 807,000 BEVs in 2026 and then 1.2 million battery-electric cars in 2030. Including hybrids and plug-in hybrids, sales of “Kia’s environmentally friendly models” are expected to exceed two million by 2030. Total sales across all powertrain types are then expected to reach four million units – with 3.15 million vehicles targeted for 2022.

In Kia’s case, the updated plan calls for a lineup of 14 BEV models by 2027. Starting in 2023, Kia plans to launch at least two BEVs per year, including two electric pickups and an entry-level BEV model. Kia does not yet provide further details on these vehicles in its current announcement.

While Hyundai has announced further development of its current EV platform E-GMP for 2025, Kia does not mention this Integrated Modular Architecture (IMA). Hyundai plans to rely not only on standardized e-motors and chassis designs, but also on batteries with cell-to-pack technology from CATL, which does not require modules. In its announcement, Kia refers to everything from the upcoming EV9 – the large E-SUV is still based on the current E-GMP.

Electric cars will also continue to be built in Korea, but in their home country, Kia also plans to step up research and development of these vehicles. A new battery procurement strategy is also planned, with Kia citing a demand of 119 GWh for 2030. Among other things, the Indonesian battery cell joint venture is to play an important role, but cells will continue to be sourced from “global battery companies.”

Like Hyundai, Kia also wants to improve in the area of software. From 2025, all new models are to be equipped with “first-class connected car functions.” In addition, the ‘AutoMode’ semi-autonomous driving system is to be further developed, with a premiere planned for the EV9 in 2023.

Kia has also identified “purpose-built vehicles” or PBVs as a further growth area – customers with special needs are to be offered vehicles specialized in this area. As an example, Kia mentions a PBV model based on the new Niro that is to be optimized for both cab services and ridehailng providers. In the medium to long term, such vehicles will be built not on the basis of existing models, but on a dedicated e-skateboard platform.

“Kia has been undergoing a full-scale transformation which has included changes in corporate vision, logo, product and design, and strategy,” said Ho Sung Song, president and CEO of Kia Corporation. “To achieve the company’s vision of becoming a Sustainable Mobility Solutions Provider, we will focus on accelerating the transition to future business models. We will become even more customer-centric in our approach and pursue a dynamic transformation while maintaining sound business operations.”