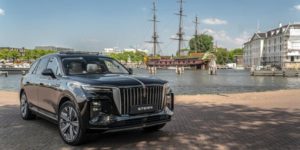 Hongqi is the next Chinese car brand to enter the European market with electric cars. The FAW Group subsidiary brand has been present in Norway since January 2022 and has now entered into a cooperation with Stern Premium Car in the Netherlands to import and distribute its vehicles.

Hongqi plans to offer the E-HS9, an electric SUV with up to seven seats, as its first model in the Netherlands as well as in Norway. Hongqi is the premium brand of the FAW Group, and the E-HS9 is the brand’s flagship model. Accordingly, the design with the powerful front and the optional two-tone paint finish is designed for prestige.

The E-HS is available with two battery options. According to Chinese media, the smaller battery with 76.5 kWh is supposed to provide a range of 396 kilometres – however, it is not stated in which cycle the range was determined. The variant with the larger battery not only increases the range, but also the drive power from 325 to 410 kW. With the 90 kWh battery, up to 465 kilometres should be possible.

Deliveries in the Netherlands are scheduled to start in the fourth quarter of 2022. Prices are not yet mentioned in the reports.

In Norway, the market entry has been quite successful so far: according to the figures of the portal “EU-EVs”, 373 units of the E-HS9 were newly registered in the second quarter – putting the model ahead of models such as the Volvo C40, VW ID.3 or Mercedes EQA. In the first quarter, there were even 578 registered examples – but here it is unclear how many demonstration vehicles are included in this figure.

Stern Premium Car was founded in 1993 and distributes brands such as Alfa Romeo, Mercedes-Benz, Jeep or Volvo at more than 60 locations in the Netherlands. Stern is a subsidiary of the Hedin Mobility Group – the Swedish company that will be responsible for the distribution of BYD models in Sweden and Germany.

Mercedes launches sales of the EQE in China

Mercedes kicks off production of the EQS in the USA