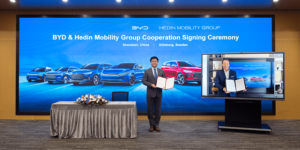 Just last month, BYD announced its market launch in the Netherlands. There, sales will take place in partnership with the Louwman car dealer group. Now, in Sweden, the first BYD showroom is to be opened in Stockholm in October 2022. In addition, showrooms are planned in several German cities, the first of which are also to open in October. Concrete information on the models BYD will offer in Germany and Sweden is to follow in September. Since there is talk of a “variety of the latest models in the BYD passenger car range”, it will probably be more than one model. A special customer website for the two countries is to go online before the end of August.

Although BYD has not yet revealed which models are to be taken to the European market, the first vehicles are expected to be delivered this year. BYD says “Customers who opt for the market-leading brand early will receive their vehicles in the fourth quarter of 2022.” Although it is unclear which unit numbers or models BYD is planning for Germany and Sweden or the Netherlands, BYD now exclusively produces electric cars and plug-in hybrids.

Due to its extraordinarily high uptake of electric vehicles, like other non-European companies, the pilot market for BYD in Europe is Norway, where the Chinese company sells the Tang EV electric SUV. In its home market, BYD has numerous other electric vehicle models in its programme. Some of these are multi-energy models such as the flagship Han sedan, which is available both as a purely electric vehicle and as a plug-in hybrid. Other models, such as the small electric car Dolphin or the compact sedan Seal, are based on a pure EV platform with an 800 volt system voltage.

Hedin Mobility Group says it has sold over 125,000 cars worldwide in 2021. The group operates 235 car dealerships and employs over 6,300 people in eight countries. With its 40 brands, Hedin has generated 2.6 billion euros in sales. While the Swedish company have a much stronger presence in the Scandinavian countries, their presence in Germany is still very young: the subsidiary KW Autohaus GmbH operates a showroom in Bremerhaven and otherwise sells used combustion vehicles of the Dodge and Ram brands online. According to Hedin, BYD sales will be made “through a number of hand-picked top dealers in Germany”.

“We are delighted to provide world-leading technologies within our inspirational range of new energy passenger vehicles to the German and Swedish public,” said Michael Shu, general manager and managing director, BYD Europe and International Cooperation Division. “We believe the timing is perfect to meet consumer demand for more eco-friendly solutions.”

BYD is tackling another European market with its electrified passenger car models. In Denmark, BYD has now selected the Nic. Christiansen Group as a distribution partner. The first BYD store in Denmark is scheduled to open this autumn in Copenhagen and a website for the Danish market will go online at the end of August.