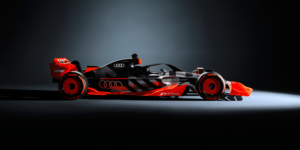 Audi will compete in Formula 1 from 2026. As the manufacturer has now officially announced, its own hybrid drive unit is being developed for this purpose at Audi Sport’s Motorsport Competence Centre in Neuburg an der Donau. Around half of the power is to come from the electric motor.

The background to Audi’s entry into Formula 1 is the new engine regulations, which from 2026 will see a sharp increase in the proportion of electric power compared to current Formula 1 drives. According to a VW board decision, the new engine regulations were one of the prerequisites for the entry – if the regulations had remained constant, it would have been too time-consuming and probably above all too expensive for a newcomer to catch up with the existing manufacturers’ experience with the complex drive units.

“Motorsport is an integral part of Audi’s DNA,” says Audi CEO Markus Duesmann. “Formula 1 is both a global stage for our brand and a highly challenging development laboratory. The combination of high performance and competition is always a driver of innovation and technology transfer in our industry. With the new rules, now is the right time for us to get involved. After all, Formula 1 and Audi both pursue clear sustainability goals.”

According to Audi, the site in Neuburg an der Donau already has test benches for Formula 1 engines, high-performance electric motors and batteries. The necessary expansion in terms of personnel, buildings and technical infrastructure is currently being undertaken there, and all the essentials should be in place by the end of the year – at least that is what the manufacturer states in the press release. A separate company was recently founded for the power unit project as a subsidiary of Audi Sport.

The now announced Formula 1 entry is also accompanied by a renewed restructuring in the motorsport department. Julius Seebach, until now both Managing Director of Audi Sport and Head of Motorsport, will move from Audi Sport internally to Audi AG in Technical Development on 1 September. Seebach’s successor in Neuburg will be Rolf Michl, Chief Operating Officer Racing at Audi Sport since February. The new Formula 1 subsidiary will be headed by Adam Baker, who was employed by the world governing body FIA for three years before joining Audi in 2021.

It is not yet known which team will use the Audi power unit in Formula 1 from 2026. Audi wants to communicate this decision by the end of the year. The Sauber team from Switzerland, which currently competes as Alfa Romeo, has long been considered the favourite.

Porsche is also likely to enter Formula 1 from 2026. However, an official announcement on this has yet to be made. For Porsche, it will come down to a partnership with Red Bull.

As already indicated in August, Audi has now selected the Swiss racing team Sauber as a partner for its Formula 1 project. The partnership means that Sauber will compete as an Audi works team from 2026 and use the drive unit developed by Audi in Formula 1. Audi is developing the hybrid power unit with its new subsidiary Audi Formula Racing GmbH in Neuburg an der Donau, which will be built according to new engine regulations with a higher electric share of the total power. Sauber is building the corresponding racing car at its Hinwil site and will also be responsible for the racing operations.

According to the announcement, Audi is also planning to acquire a stake in the Sauber Group but has not given further details. There is, however, information on the further timetable: in 2023, the expansion of the site in Neuburg should be largely completed in terms of personnel, buildings and technical infrastructure. The first test drives with the power unit developed for the 2026 regulations in a Formula 1 test car are planned for 2025.

“We are delighted to have gained such an experienced and competent partner for our ambitious Formula 1 project,” says Oliver Hoffmann, Member of the Board for Technical Development at AUDI AG. “We already know the Sauber Group with its state-of-the-art facility and experienced team from previous collaborations and are convinced that together we will form a strong team.”

Kia allows sneak peeks of the EV9 to premiere early 2023