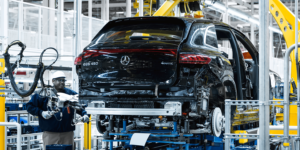 Mercedes-Benz has given the go-ahead for the production of the EQS SUV. The SUV offshoot of the all-electric EQS is now being produced at the US plant in Tuscaloosa for the global markets. The German company had already started sales a few weeks ago.

For years, the vehicle plant in Alabama has not only built vehicles for the US market but also the large SUV models for the world market, i.e. the GLE (formerly M-Class) and GLS series. Consequently, Mercedes-Benz had also awarded the production of the two large E-SUVs to the US plant.

The EQS SUV debuted in April. As the third model based on the EVA2 electric vehicle platform, it introduces minor technical enhancements; the output of some engine options, for example, has been increased slightly – the changes will also come in the EQS sedan, which Mercedes will continue to build in Sindelfingen, Germany. Technical data for the EQS SUV is available here.

The battery systems for the EQS SUV come from the battery factory Mercedes opened in March in nearby Bibb County. There, Mercedes manufactures the ready-to-install battery packs from purchased cells. In the future, the electric vehicle models from the US plant will use battery cells from Envision AESC, also manufactured in the USA. A deal to this effect was also announced in March at the opening of Mercedes’ battery assembly plant.

“Our production network is very well positioned for the sustainable and rapid scaling of electric vehicle volumes,” said Mercedes board member for production Jörg Burzer. “With the new EQS SUV joining our production portfolio of all-electric Mercedes-EQ models, we reached another important milestone in our strategy to go all-electric by the end of the decade – wherever market conditions allow. I am absolutely sure that our great Tuscaloosa team will make the electric SUV another global success.”

Mercedes-Benz USA has announced pricing and packaging structures for the EQS SUV after starting production at the US plant in Tuscaloosa a few days ago. The fully-electric SUV starts from $104,400 and will arrive in US dealerships in autumn 2022.

The EQS 450 4MATIC SUV will join the EQS 450+ SUV and EQS 580 4MATIC SUV and each will come in three trims, Premium, Exclusive, and Pinnacle.

Mercedes states the estimated EPA range figures, with the EQS 450+ producing 305 miles and the EQS 450 4MATIC and EQS 580 4MATIC producing 285 miles of range.

At current exchange rates, US pricing in euros (€104,449.60) is cheaper than the prices in Germany quoted above. However, since Mercedes produces the EQS SUV exclusively in the US, the difference likely reflects the import/export.