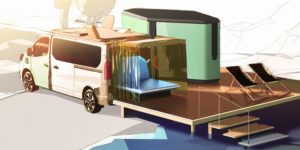 Renault has announced a purely electric camping van study for the Düsseldorf Caravan Salon starting at the end of August. Called the Hippie Caviar Hotel, the prototype offers a preview of the first purely battery-powered Renault Trafic, which will make its market debut later this year.

Renault’s Hippie Caviar Hotel is still able to offer a 1.45 by 1.95 metre double bed that comes with a special feature of folded out both in the cabin and outside the vehicle. The mattress can be partly folded up to create lounge-style seating. With the tailgate open, happy glampers can get an unobstructed view of nature.

Renault has said that the electric glamper-van is to have a 285 km range. The 90kW motor is to be powered by a 45-kWh-battery pack that should be able to recharge up to 80 kW DC. More technical data is no doubt be revealed at the trade fair itself. When it comes to charging, Renault has come up with an unusual solution, at least for the study: with a “5-star premium package”, customers can request a “logistics module” to be transported to the site consisting of a wet cell, sanitary facilities and charging station.

Among the efforts to make the vehicle as sustainable as possible, the carmaker says that the shelves and floor in the van are made of recycled tyres and cork.

Flashing through 14 European countries in under 24 hours