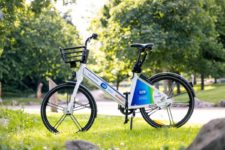 Micro-mobility providers Bleeper and Moby will maintain and operate the electric bikes with the charging infrastructure provided by ESB. Bleeper’s ESB eBikes scheme is available via the Bleeper app. The Moby scheme will be operational over the coming weeks and can then be accessed via the ESB eBikes app.

The daily cost of hire has been subsidised by ESB, starting from just €5 per day for those having a €30 monthly subscription. A full day without subscription costs €10. Users must return the bike to the same station by midnight.

Speaking at the launch of the ESB eBikes pilot project, Marguerite Sayers, Executive Director, Strategy, Innovation and Transformation at ESB, said the idea had been developed through the X-Potential Incubator programme. “We are very proud today to unveil one such idea – our eBike pilot – which is a new concept in Ireland,” she said.

This project also makes Dublin a part of the broader Interreg North-West Europe eHUBS programme with other member cities such as Amsterdam and Manchester.

The scheme provides funding for on-street e-bikes, e-cargo bikes, e-scooters and e-cars to develop a blueprint for cities and regions to establish a market for shared commercial e-mobility aligned with local policy.

As a strategic research partner to the project in Ireland, Trinity College Dublin will analyse whether commuters will switch from private cars to the shared e-mobility solution. The team will also identify key mobility patterns, calculate carbon savings, and evaluate commercial potential based on data collected from ESB eBikes.

ESB stands for Electricity Supply Board and is a state-owned utility. They have been in electric transport in Ireland for some time, e.g. ESB runs charging stations and its own fleet of electric vans. The ESB eBikes project will run until summer 2023.