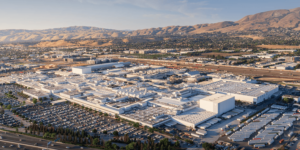 Tesla wants to assemble battery modules at its electric car plant in Fremont, California, at least according to an application filed with the city of Fremont. The extension appears in line with other plans to expand production.

The company has filed for permission to install a battery production line on the second floor of the main building and refers to the “module portion of the line”. The cost, listed at $1.5 million, indicates a relatively small project.

Nevertheless, this is remarkable, as Tesla has so far relied on ready-made battery packs supplied from the Gigafactory in Nevada, operated jointly with Panasonic, to produce its electric cars in Fremont.

Tesla bought the Fremont factory from Toyota in 2010. However, it is the only Tesla factory known to have produced all four models at much lower volumes than today. The company aims to deliver 1.5 million EVs this year.

Teslarati, who broke the news, accordingly quotes an analyst from Morgan Stanley who found the Fremont Factory “incredibly tight in terms of storage capacity and room in general”. At the same time, Fremont is currently running at a capacity of 20 per cent above what has been considered its maximum. “The plant was never designed to produce 450k units (at its peak produced ~300k units before Tesla took it over from Toyota), which was immediately apparent at the tour,” the analyst wrote. One of four assembly buildings is essentially a tent where the staff assembles cars.

Tesla has also filed another application for extensions worth $1.3 million. The company wants to install a new maintenance office, a storage area, production cells with equipment for the hood, fender, and trunk lids, and offline cell manufacturing equipment. This project is listed to be on the first floor of the assembly building.

The filings are in line with Elon Musk thinking aloud about extensions. However, the Tesla boss at a recent meeting even suggested another plant in North America which could be announced before year’s end. Most recent news named Ontario, Canada, as a possible location.

Tesla targets producing 20 million electric cars a year in 2030. This will require ten to twelve factories – apart from Fremont, Tesla operates Gigafactories in Shanghai, Berlin and Austin. Only at Gigafactory 1 in Nevada does Tesla produce batteries and components together with Panasonic.

Redwood Materials closes in on search for sites in Europe