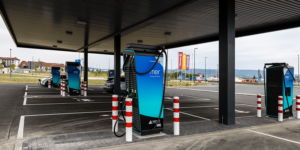 Charge point operator Mer and installers Joju Charging will help roll out new EV chargers at Council-owned car parks in Bournemouth, Christchurch and Poole. There will also be four rapid-charging hubs among the 34 designated sites.

The BCP Council that organises the three towns centrally has contracted Mer and Joju Charging to install 130 new EV charging stations. The four rapid-charging hubs will see them install eight 50kW-150kW chargers, including Hawkwood Road and the Pavilion car parks in Bournemouth, Bank Close in Christchurch, and Seldown in Poole. Mer dynamically balances the power available across charging vehicles. If fewer than eight cars are charging, each vehicle can charge at higher power.

Mer has previously worked with the BCP Council in upgrading older charging infrastructure, and it has been almost four years in the making. The new installations at car parks mark phase 2 of the programme.

Karl Anders, Mer UK Managing Director, said, “Working with a major Unitary Authority like BCP Council, that is prioritising the planet by tackling climate change and driving EV adoption for residents, is an encouraging step forward to meeting the government’s 2030 targets.”

Mer has also worked with Joju Charging and is deploying chargers across the South Coast of England. The BCP project is running alongside those in the neighbouring councils of Dorset (50 chargers), New Forest (20 chargers), and Isle of Wight (28 chargers).

Mer was previously known as Gronn Kontakt in the UK. When (re-)launching in the UK in 2021, Mer wanted to bring knowledge gained from Norway to the new market, i.e. focus on workplace and high footfall locations.

Mer is also building out EV infrastructure in Sweden and Germany.

Statkraft acquired Mer in late 2019, following the acquisition of German EV charging firm E-Wald in the same year. Since then, the Norwegian utility has also acquired Vattenfall’s charging business.