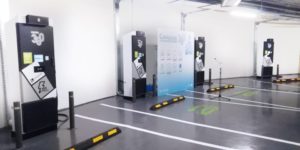 Spanish charging station maker Circontrol has launched its first 400 kW chargers and installed them in the most powerful urban charging hub in Spain. Inaugurated in the centre of Madrid, it will provide 2.5 megawatts of power for electric vehicles.

Public transport operator Empresa Municipal de Transportes de Madrid (EMT) is running the Canalejas 360 charging hub, named after its location in a car park at the Plaza de Canalejas in Madrid. EMT says this will be one of the largest indoor charging hubs in Europe.

Circontrol is the sole supplier of charging stations to EMT at this location. The ultra-rapid chargers are of type Raption 400.

Joan Hinojo, CEO of Circontrol, stressed that “with the installation of the four Raption 400 in Canalejas, the company has demonstrated again its ability to keep pace with the market that increasingly demands more powerful and faster chargers”.

He added that the company was committed to high-power charging, “but we do not forget that electric vehicle charge must combine fast charging with slow charging in other environments such as domestic, business or leisure environments.”

Circontrol had faced issues, like many other manufacturers, with supply line issues over the last year but had also opened a new testing laboratory in Barcelona in September last year. Since then, the company has re-tooled to supply fast-charging stations and has launched several products not represented at the new charging location, including the Raption 150 Compact, which features 150 kW of power, and the Raption 350 HPC, which has a capacity of up to 350 kW.

Just a few months ago, Circontrol also announced a partnership with the London Electric Vehicle Company (LEVC) to promote sales and installation of charging stations with dealerships of the British manufacturer in Spain. Hinojo said that the company was aiming to utilise LEVC’s market recognition while supplying the burgeoning EV market in Spain. “The agreement with LEVC will allow commercial vehicle drivers to learn about our solutions from a company renowned for its legendary taxis.”