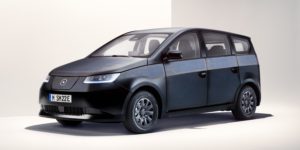 Sono Motors and car subscription provider Finn have signed a letter of intent to reserve and purchase 12,600 units of the Sion solar electric car.

The two companies plan to reach a final agreement on their collaboration in 2023. Finn was one of Sono Motors’ first B2B reservations. The first non-binding reservation of 5,500 Sion was made in 2020.

The first 100 electric cars are expected to reach Finn in 2024. After that, another 2,500 vehicles are to be delivered per year until the total number of 12,600 is reached. The car subscription provider plans to use them for its service in Germany.

In addition, as of September 1, 2022, Sono Motors could record more than 20,000 direct customer reservations (B2C) with an average down payment of around 2,000 euros net.

However, some time still remains until the first Sion will be ready to leave the factory and be handed over to customers. The Munich-based solar car developer last presented the series design of the solar electric car in July. However, production is not scheduled to start until the second half of 2023.

Go Ahead electrifies the fleet in North East England

2 Kommentare zu “Finn to purchase over 12,000 Sion from Sono Motors”