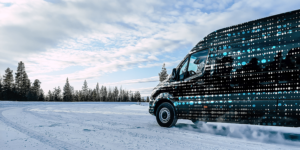 Mercedes-Benz will launch all new vans with electric motor options starting from 2025. The company has now designated the first plants to produce the next-gen large electric vans in Europe. It is also exploring joint European production with US electric car startup Rivian.

Mercedes-Benz Vans will reportedly rely on a new electric platform called VAN.EA (Van Electric Architecture) for its electric vehicles in the future. It will be the basis for all Mercedes-Benz electric vans in the mid-size and large segments to be launched from 2025.

The manufacturer is now announcing locations where the open construction models of VAN.EA – the platform for bodybuilders or flatbed trucks – will be taking place. The first factory to be retooled for this purpose is in Düsseldorf. The factory there is the largest production plant of Mercedes-Benz Vans and is already building the current generation of the Sprinter and eSprinter, and will begin with the next generation of the eSprinter soon. The manufacturer plans to invest around 400 million euros in the necessary conversion measures at the site.

Mercedes-Benz Vans’ second German plant in Ludwigsfelde will also be upgraded for the next generation of the eSprinter (open-top model). In addition, the company is considering establishing Ludwigsfelde as a competence center for electric van customization.

The large closed-model and panel van variants of the VAN.EA platform are to be built “at an established location from the Mercedes-Benz AG production network in Central and Eastern Europe”. The Ludwigsfelde plant will therefore be integrated into the Mercedes-Benz Vans manufacturing network. By taking this measure, Mercedes-Benz Vans says it intends to exploit cost advantages and thus ensure its competitiveness in the long term.

“We traditionally operate in a highly competitive environment. This situation is continuously intensifying through the ever-increasing number of new providers entering our segment. It remains our commitment to offer the best vans and services – which means we have to be highly innovative and competitive in all areas,” explained Mathias Geisen, Head of Mercedes-Benz Vans. “We want to retain our position as the only van manufacturer producing large vans in Germany – despite the increasing costs associated with the e-mobility transformation. To achieve this, we are aligning our European production network. Incorporating an all-new production facility leveraging an existing Mercedes‑Benz site in Central/Eastern Europe into that network will help us secure the long-term competitiveness of our German plants and enable the successful transition of Mercedes-Benz Vans into the electric era.” Discussions with employee representatives at the German plants on the plans are still pending and are expected to begin soon, he added.

But before the electric transporters based on the VAN.EA platform are launched, the next generation of the eSprinter van based on the Electric Versatility Platform will follow next year, which is expected to open up new markets, including the U.S. and Canada. The range of the vehicle will be more than double compared to the current model, depending on the configuration. Production of the next generation of the eSprinter will start successively at the Charleston, Düsseldorf and Ludwigsfelde plants from the second half of 2023.

In other news, cooperation between Mercedes-Benz Vans and the US electric car startup Rivian is emerging. The two sides have signed a memorandum of understanding for a strategic partnership, setting out their plans to invest in and operate a joint factory in Europe together as part of a joint venture. Rivian is struggling to ramp up its production, with pre-orders already totalling around 98,000 vehicles as of June 30, 2022.

An existing Mercedes-Benz site in Central and Eastern Europe is to be used for the construction of the new production facility for all-electric vans. According to the partners, large electric vans for Mercedes-Benz Vans and Rivian should be rolling off the production line there in just a few years. It remains unclear whether this will be the same site where the large VAN.EA vans from Mercedes-Benz Vans are produced in the closed model or as panel vans. However, Mercedes mentions that both sides are planning production-optimized vehicle concepts for efficient manufacturing on joint production lines. While Mercedes-Benz’s large electric Vans are based on said VAN.EA, Rivian’s vans are based on the Rivian Light Van (RLV) platform.

Rivian CEO RJ Scaringe stated: “Rivian was created to encourage the world to transition away from fossil fuel consumption by creating compelling products and services. We’re delighted to be partnering with Mercedes‑Benz on this project. Mercedes‑Benz is one of the world’s best known and respected automotive companies, and we believe that together we will produce truly remarkable electric vans which will not only benefit our customers, but the planet.”