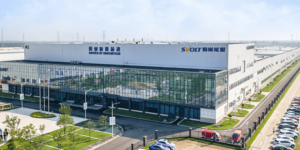 SVOLT has confirmed building another cell factory for the European battery industry in Germany. The new site at Lauchhammer, Brandenburg, is a former wind turbine plant owned by Vestas. The company aims to repurpose it fast, by early 2025.

This is to make up for the delays SVOLT is now facing in Saarland. The Chinese company has been planning to produce battery cells in central Europe for some time and had confirmed factories in the German state of Saarland in November 2020. SVOLT aims to make cells near the town of Überherrn, close to a battery assembly in Heusweiler, also Saarland. However, the new plans in Brandenburg come on the back of said delays at the Saarland sites. We will come to these later.

Yet there are other reasons for Lauchhammer. Brandenburg, the state that surrounds Berlin, lies along the region’s supply chain and battery life cycle. There is, for example, the chemical company BASF which entered a partnership with SVOLT for battery materials and recycling at the end of 2021. BASF is currently building a cathode material factory, including a recycling pilot plant, in Schwarzheide, less than 7 kilometres from Lauchhammer.

SVOLT is planning to start production in Brandenburg in early 2025, Maxim Hantsch-Kramskoj, VP of Sales & Marketing of SVOLT Europe, told journalists. The company targets an initial capacity of 16 GWh.

That sounds like construction will quick (and rushed). The former Vestas site is a so-called brownfield project. SVOLT says it took over the plant, including buildings and infrastructure, from the previous owner at the end of August and will now “repurpose the majority of the existing halls”. However, rebuilding measures and extension works will also be necessary and realised in the near future, so SVOLT. The company adds that it was developing a master plan including a detailed schedule for all modernisation and building measures.

At the same time, the construction of the Saarland sites will take much longer than planned. According to the Saarbrücker Zeitung paper, Kramskoy does not expect SVOLT to produce battery cells in Überherrn before 2027 – that is four years later than initially announced.

Even though Heusweiler builds on an existing building like Brandenburg, there would also be delays at this second Saarland site for the assembly of modules and packs, the manager said. Production was supposed to start in the middle of this year with parts from other SVOLT plants. Now the company says it will only begin assembly by February 2024.

Hantsch-Kramskoj did not detail the reasons for the delay but pointed to the project being “very complex”. Following experts, they would now reach master planning. The Saarland sites would get the time they require, he said.

SVOLT has to deliver, first from Brandenburg

Still, SVOLT has to deliver another driver for selecting the Lauchhammer site reasonably quickly. So far, PSA is confirmed as a customer and signed an option for 7 GWh as reported.

Kai-Uwe Wollenhaupt, President of SVOLT Europe & VP of SVOLT Energy Technology, said he was happy that they were able to conclude the conversations with Vestas timely and take over the site.

Mirko Buhr, Mayor of the City of Lauchhammer, also went on to “explicitly thank all those involved for their dedicated efforts to bring a successor company to the former Vestas site as swiftly as possible.”

The site offers 255,000 square metres of space, and SVOLT has the right of first refusal on an adjacent free area of another 71,000 sqm.

Hantsch-Kramskoj referred to the project as a “gigafactory” when speaking to the local press. Even if put in Tesla-speak, the new factory won’t compare to the Tesla plant in Grünheide, about 150 kilometres away.

As for synergies between the plants in Brandenburg and Saarland, SVOLT expects to utilise battery cells produced in Lauchhammer at the future assembly site in Heusweiler. At least until the Saarland cell factory comes online. SVOLT aims to produce between 22 and 32 Gwh, double the 16 GWh in Brandenburg. That is batteries for about 300,000 to 500,000 e-vehicles per year.

SVOLT has not disclosed which cells may be made in Brandenburg (and Saarland). However,  the company has pushed cobalt-free battery cells since July 2019. These have undergone testing for at least two years now.

Plus, the battery maker that came out of Great Wall Motors reportedly produced a prototype batch of 20 Ah cells with a solid electrolyte based on sulphide only a few weeks ago in China. The prototype solid-state cells have an energy density of 350-400 Wh/kg. This is in line with SVOLT’s earlier tests, and the result promises a range of over 1,000 kilometres for electric cars in future.