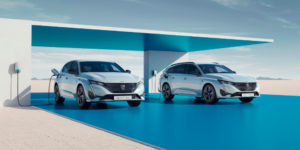 Peugeot has officially confirmed all-electric versions for the 308 and its estate offshoot, the 308 SW. The duo will be on the market from mid-2023 and, as expected, will have a new electric motor on board. The French company also provided a detailed look at the technical data sheet of the double pack.

The model’s electrified variants on the market so far are the 308 and 308 SW plug-in hybrids. The introduction of a fully electric counterpart has long been expected. Now comes the official confirmation – garnished with many technical details. The BEV model, which is based on the EMP2 platform, will be equipped with the new 115 kW electric motor that we have already reported on. Also on board – as leaked in advance – is a new generation of batteries. But let’s take it one step at a time.

Let’s stay with the electric motor for a moment: it increases from 100 to 115 kW, while the maximum torque remains at 260 Nm. Peugeot promises “immediate response” and freedom from vibration. As expected, the drive power remains behind the system power of the 308 plug-in hybrids (132 or 162 kW). The e-308 will be launched as a front-wheel drive car, similarly to the well-known electric cars based on the e-CMP or EMP2.

The new 54 kWh battery with 51 kWh usable capacity is now based on NMC811 cells and, depending on the equipment, should enable a WLTP range of over 400 kilometres. By comparison, Peugeot has so far been working with 50 kWh (of which around 45 kWh is usable). The electrical system of the new e-308 continues to operate at 400 volts. A three-phase onboard charger with 11 kW is installed ex-works. At a public 100 kW charging station, the vehicle can be charged from 20 to 80 % in less than 25 minutes, says Peugeot. This is also possible with the familiar models.

The Stellantis subsidiary emphasises the efficiency of the two new BEV variants. According to the manufacturer, the front end and the underbody have been optimised for aerodynamics, friction losses of the tyres (class A) have been reduced and the weight of the vehicle has been optimised. In combination with the new generation of engines and batteries, this should lead to an average consumption of only 12.7 kWh per 100 kilometres. So Peugeot will have to measure itself against this mark in the first longer tests.

The two electric 308s will be available in the equipment variants Allure and GT – a detailed differentiation will follow at a later date. For all variants, customers will be able to choose between three driving modes (Eco, Normal, Sport) and recuperate via ‘Brake’ mode. Also on board will be a latest-generation cockpit (“i-Cockpit”) featuring, among other things, a compact, heated steering wheel, a digital head-up display and a central 10-inch touchscreen. Furthermore, the manufacturer announces the latest in connectivity, infotainment and interior processing for the launch of the duo.

Design changes are minimal, with the BEV variants broadly matching the look of the plug-in hybrids. There is one exception: according to Peugeot, special 18-inch aluminium wheels were developed for the electric version in order to do something for the efficiency account.

Peugeot does not yet comment on the price, but announces that the e-308 will be available for purchase entirely online in some countries.

The reported data are of course also interesting for other Stellantis brands. For example, the Opel Astra-e and the DS4 E-Tense will probably also be equipped with this new version of the BEV drive. It is not known whether the existing models from the e-CMP-based small cars to the EMP2 minibuses will also soon receive the improved drive.