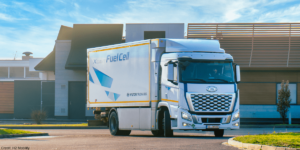 Hyundai and California’s South Coast Air Quality Management District have secured funding for another five fuel cell trucks and infrastructure. They applied for Targeted Airshed Grant (TAG) funding from the US Environmental Protection Agency EPA and were successful twice.

First Element Fuel (FEF), the largest hydrogen-refuelling station operator in the US, will deploy the Class-8 heavy-duty trucks from Hyundai to deliver hydrogen to their refuelling stations for the next five years.

Commenting on this neat arrangement, Mark Freymueller, Senior VP and Head of Commercial Vehicle Business Innovation of Hyundai, said this would “help local stakeholders to decarbonize the hydrogen supply chain itself by substituting conventional trucks, which have been used to haul hydrogen – to hydrogen trucks.”

The funding requires one year of demonstration with reporting duties to the EPA and four years of commercial operation.

The South Coast Air Quality Management District (South Coast AQMD) applied for the TAG funding and will lead the project. EPA said they granted the funding after careful review, and the final approval will enable Hyundai to deploy five Xcient fuel cell trucks.

However, Hyundai is no stranger to the EPA. In July 2021, they already secured funding for two FCEVs when South Coast AQMD applied successfully to the EPA, as reported. Their first project, funded with $500,000, saw them use two fuel cell trucks for a year and FEF take on refuelling.

EPA’s TAG program aims to reduce air pollution from ozone and fine particulate matter. Projects must directly reduce emissions, generate measurable reductions of ozone, PM2.5, and/or precursor emissions, and support National Ambient Air Quality Standards (NAAQS) in one or more of the nation’s most impacted areas. Suppliers must team up with state agencies to apply.

Hyundai revised the Xcient fuel cell trucks in May 2021, combining a 350 kW electric motor with two 90 kW fuel cell stacks for 180 kW. The tractor’s tank in the project can hold 67 kg of hydrogen, with the battery providing 72 kWh to deliver an average range of over 450 miles per tank, so Hyundai.

Last year, Hyundai also announced its NorCal Zero project, which will see them begin operating 30 Xcient FCEVs in California starting in the second quarter of 2023. This will be the largest commercial deployment of Class 8 hydrogen fuel cell electric trucks in the US, as reported.

Ikea to use electric trucks from Volvo in Poland