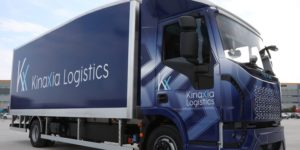 The British e-truck developer Tevva has started series production of its battery-electric 7.5-tonners in Tilbury, Essex. The first series model has already been delivered to Kinaxia Logistics. Tevva wants to provide more information on their European rollout at the IAA.

According to Tevva, the 7.5-tonne truck achieves a range of up to 110 miles (180 kilometres) in pure electric mode and up to 272 miles (440 kilometres) with the fuel cell range extender activated. The e-truck is available in right- and left-hand drive.

When Tevva first unveiled their electric truck with FC range extender in September 2021, they were still aiming to start production in July 2022. In view of the global supply chain problems and the well-known challenges of a production ramp-up for start-ups, the two-month delay seems relatively short – provided Tevva can subsequently keep production running and scale it up.

After all, according to the plans, expansion is to take place soon: The 7.5-tonne truck is only the first model in an entire family of trucks with this drive. In addition to this model, Tevva wants to launch a twelve and 19-ton model, which is said to debut at the IAA Transportation next week.

At the fair in Hanover, the company will also announce details of its plans for continental Europe. This will probably also involve new production facilities since the company is committed to a “build where we sell” philosophy.

Tevva also provided some insights into the testing phase in today’s communications. During heat tests in Spain’s Sierra Nevada, the 7.5-tonne truck, loaded with a 2.5-tonne cargo, repeatedly drove down mountain passes with altitudes of up to 2,500 metres. There was “no noticeable drop in performance,” so Tevva. Incidentally, this was also the result of the cold-weather tests in Finland, 300 kilometres north of the Arctic Circle.

Schaeffler to debut fuel cell van at the IAA in Hanover