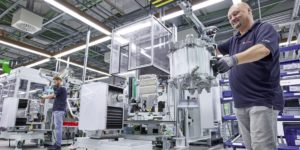 Bosch is putting a new electric drive for vans and small and medium-sized trucks into series production. The new drive unit consists of an electric motor plus an integrated inverter. The German automotive supplier already has Daimler Truck as a launch customer.

Bosch says the entire drive unit could also be called a 2in1 drive, weighing around 80 kilograms. Efficiency is highlighted as a special feature: Bosch has reduced electrical losses by more than 20 per cent with new power semiconductors, which enables 97 per cent inverter efficiency.

In the design process, engineers have derived the inverter from passenger car components. The company says that this has significantly accelerated development and reduced costs. The drive uses a common water cooling circuit with the battery, eliminating the need for an additional oil-based cooling circuit. Since the speeds are higher in comparison to the predecessor motor, this means that a single-speed gearbox should also be sufficient. The new microcontrollers have a higher computing power, which allows them to process the “complex control algorithms of the electric drive in milliseconds”. At the same time, it is possible to customise the software for the actuator’s behaviour.

“Compared to its predecessors, the new unit provides even higher power and torque density and is even lighter and more compact,” says Markus Heyn, Bosch board of management member and chairman of the Mobility Solutions division. Thanks to its flexible design, the company says the drive module should be even easier to integrate into existing and new vehicle models.

The electric drive will make its debut at the customer Daimler Truck, where the new electric drive will be used for the first time with the support of a DC/DC converter and the central control unit from Bosch for the powertrain. The maximum power is 129 kilowatts, and the continuous power is 100 kilowatts. For short periods, the permanently excited synchronous machine can generate a torque of 430 Newton metres. The supplier specifies a maximum vehicle weight of 8.5 tonnes.

While Bosch has not yet revealed which models are to use the new drive system, the company also describes the unit as a “new e-drive for small trucks”. The corresponding model at Daimler Truck would be the Fuso eCanter, the second generation of which will also be exhibited at the IAA trade fair in Germany.

The supplier will build the drive unit at its plant in Hildesheim in the German state of Lower Saxony where the Bosch headquarters for electric drives is located. Bosch has also equipped two van models, VW e-Crafter and the MAN eTGE with fuel cell technology which are already being tested on the road.