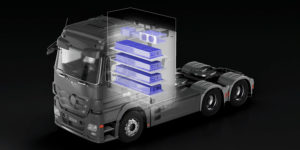 CATL has introduced a new battery technology called MTB (Module to Bracket) for heavy-duty electric trucks. The MTB technology integrates the battery module directly into the vehicle’s chassis, which, according to CATL, enables a 40 per cent increase in battery system utilisation and a ten per cent reduction in weight.

Analogous to the Qilin battery for the passenger car market presented by CATL in June, the Chinese battery company is now showing a new battery solution for heavy electric trucks. In both cases, the battery structure is being touted as the main innovation here rather than new battery chemistry. The Qilin battery uses a cell-to-pack approach, in the case of the truck battery this becomes is a module-to-bracket concept. By installing the modules directly into the truck chassis, the latter solution should not only increase system utilisation and reduce weight but also lower the vehicle’s centre of gravity by 21 per cent.

CATL says that the battery packs with MTB technology could achieve energy densities of 170 Wh/kg or 305 Wh/l, have a service life of ten years or 10,000 cycles and support capacities of 140 to 600 kWh. The company specifies an operating temperature range of -35 to 65 degrees Celsius.

Unlike the cell-to-pack battery, which will be used in series production for the first time in the Zeekr 009 from 2023, CATL is linking the MTB technology for trucks with a battery swapping system. The Chinese battery-making giant makes an effort to highlight that this solution is suitable for the electrification of trucks and construction machinery that can accommodate swappable batteries. Here, the company says that the new packs use U-shaped water-cooling technology which works more efficiently for heat dissipation, which in turn, provides a better solution for electrifying battery heavy-duty vehicles with batteries enabled for swapping.

The technology will now be tested first in a battery swap project of Qiyuan Core Power. Qiyuan Core Power is a subsidiary of the State Power Investment Corporation, one of China’s five largest power generation groups.