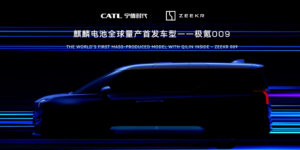 Zeekr will be the first electric car manufacturer to use CATL’s mass-produced Qilin batteries. The Chinese battery manufacturer and the Geely brand signed a five-year strategic cooperation agreement.

The new Qilin batteries will first be installed in the Zeekr 009. Although the EV has yet to be unveiled, it is already scheduled for delivery in the first quarter of 2023. A Qilin edition of the Zeekr 001 is also expected to be launched in the second quarter of 2023, and the new batteries should enable a range of up to 1,000 kilometres.

The current version of the Zeekr 001 was able to report the production of the 10,000th unit of its debut BEV 001 only about three months after the start of production. Zeekr is planning to enter the EU market with the Zeekr 001 from the beginning of 2023.

When Geely presented its financial figures for the first half of this year earlier this month, the Chinese carmaker announced its plan to make 50 per cent of its overall sales electric by 2023, which of course includes its Zeekr brand, along with Geely Auto, Lynk & Co and Geometry brands. This marks a further acceleration of the company’s Smart Geely 2025 strategy presented at the end of last year.

The new generation of batteries will no doubt even further secure CATL’s enormous lead in the electric vehicle battery market, which was already increased the Chinese battery giant’s 82 per cent increase in profits in the first half of this year.