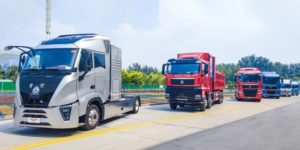 In China, China National Heavy Duty Truck Group (Sinotruck) and Weichai Power have received orders from three companies for a total of 1,100 fuel cell trucks to be delivered in the next two to three years.

The 1,100 vehicles are different model types, including 4.5-tonne, 18-tonne and 49-tonne trucks. The vehicles are equipped with fuel cells developed by Weichai and have an output of 50 kW to 200 kW.

The 49-tonne truck has already been tested in Shandong province since 2020. According to the company’s most recent announcement, the vehicle is expected to consume eight kilogrammes of hydrogen per 100 kilometres and thus come to a range of 600 kilometres with one tank filling. Consequently, the tank size is in the order of 48 kilograms of H2. In Shandong, the appropriate refuelling infrastructure has already been built along the highways to meet the needs of the H2 trucks.

In terms of details about the lighter commercial vehicles the company has only said that the agreement is the largest order for hydrogen fuel cell vehicles in China and represents “a major step forward in the commercialisation of green energy logistics vehicles”. The three customers are Qingdao Shengtonghua Automobile Sales & Service, Zibo Zhanhong Automobile and logistics company Tongxin Logistics Technology.

Sinotruck, which is also abbreviated as CNHTC because of its full name, is one of China’s largest commercial vehicle manufacturers. The company is based in Jinan in Shandong province. Weichai also comes from this province, based in the city of Weifang. The company started as one of the first diesel engine factories in the People’s Republic of China, but is now also active as a supplier in other areas. In 2018, Weichai famously entered into a strategic partnership with fuel cell manufacturer Ballard Power Systems and has since become the largest single shareholder in Ballard.

Weichai has said that on the occasion of the signing of the order, invitees included more than ten partners from the whole hydrogen energy industry chain coming from areas such as production, storage, transportation, filling and utilization. The partners took the opportunity to discuss technological innovation, industrial collaboration and market expansion “to build a mutually beneficial and all-win ecosystem.” The goal here is to build a hydrogen energy business demonstration cooperation model.