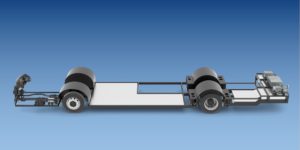 BYD presented its Blade battery platform for use in electric buses at the IAA Transportation. The space-saving design of the blade battery with CTP (Cell to Pack) technology is intended to enable a higher battery capacity while at the same time reducing the chassis weight.

Specifically, BYD puts the improvement in battery space requirements at 50 per cent. The battery concept is part of a whole bus platform, which BYD describes in the press release as the “central attraction of the stand” in Hall 21 at the Hanover Exhibition Centre.

The Chinese company is still holding back on precise technical data. BYD’s eBus blade platform is said to be “extremely adaptable”, and to improve rigidity compared to conventional structures with the characteristic CTP technology of the Balde battery. The eponymous Blade cells are installed, which are known to rely on LFP chemistry.

BYD has not provided any information on the battery size so far. However, one point stands out in the published press photos: The batteries are placed in the underbody of the bus, both between the axles and in the rear. Here BYD shows that it is a pure electric bus platform, as in the otherwise more common solo buses, which are available as diesel and with electric drive, the batteries are usually placed on the roof of the vehicle. This is also what BYD has done with the previous generations of its eBus.

In addition to the eBus Blade Platform, BYD also presented a new generation of its 12-metre electric bus as well as the two e-trucks ETM6 (7.5 tonnes) and ETH8 (19 tonnes) at the trade fair in Hanover. However, the 12m eBus shown in Hanover is still based on the old design with a battery on the roof. The LFP battery has a capacity of up to 422 kWh, which should make up to 450 kilometres possible. The 12.2-metre-long low-floor bus with a 5.9-metre wheelbase can transport up to 85 passengers.

The ETM6 is not named for its permissible total weight of up to 7.5 tonnes, but for its length of (almost) six metres – 5.95 metres to be precise. The payload is up to 3,990 kilograms, the range with the 126 kWh LFP battery is 200 kilometres – but BYD does not specify in which cycle this figure was determined. The model is not entirely new: the ETM6 has been available in Hungary since December 2021.

Regarding the ETH8 with a gross vehicle weight of 19 tonnes, BYD only states in the press release that the vehicle is designed for logistics and waste collection. There is no further data there yet, and the product page for BYD’s eTrucks only says: “Coming soon”.