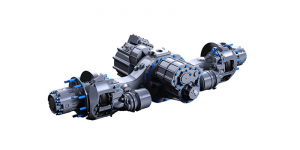 US American drive builder Cummins completed the acquisition of Meritor in August and is already debuting Meritor motor systems combined with their LFP batteries at the IAA in Hanover. Another new battery system and hydrogen engines are also on display.

First for Meritor since Cummins published plans for taking over already in February. With the acquisition now complete, the US tech supplier is free to utilise and market Meritor’s ePowertrains. Tom Linebarger, chairman of Cummins, said at the IAA that the company could “help grow Meritor’s core business given our sales and service network” and also pointed out “clear synergies for both companies”. Cummins said they were committed to bringing Cummins and Meritor electrified powertrain solutions to market as quickly as possible.

Indeed on display at the IAA Transportation are the Meritor 17Xe drivetrain for heavy-duty trucks up to 44 tons of gross vehicle weight. It can power 4 x 2 or 6 x 2 set-ups. Cummins added its battery system, a lithium iron phosphate (LFP) battery pack, which the company describes as “a new arrival” to its line-up without disclosing much further detail. LFP is free from nickel and cobalt and has a 10 per cent longer life expectancy, so Cummins.

There is also the Cummins BP95E NMC battery system. The company claims the new pack offers a 30 per cent longer life than previous models. There is also the BP30E, which the manufacturer says is compact enough to fit in most commercial vehicles.

Also on display at the IAA Transportation is its new fuel cell technology for medium- and heavy-duty trucks and buses offered as single or dual modules with 135 and 270 kW outputs. Cummins’ B6.7H hydrogen engine is displayed at IAA in the driveline of a medium-duty truck.

However, the company is also working with Scania in Europe and Daimler Trucks in North America to develop and integrate these next-generation fuel cells into demonstration vehicles.

Cummin is committed to reaching net-zero emissions from its products by 2050. “Our estimated impact of doing just that is an additional 1.4 gigatons of cumulative carbon reduction – the equivalent of removing all trucks from the road for three years,” said Jennifer Rumsey, President and CEO of Cummins.