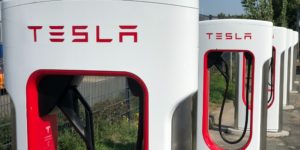 The energy price hike is also taking its toll on Tesla. The carmaker has once again increased Supercharger rates in Europe. The average rise in price across the continent was around 12 cents per kilowatt hour and even more in Germany.

At Tesla Superchargers, kWh prices vary slightly by location, so there are no absolute statements about rates in any one country. Across Europe, kWh prices are rising by an average of around 12 cents, according to observations by Electrek. The US blog states that hardly any Supercharger stations remain in Europe with prices below 0.60 euros/kWh. Charging 60 kWh would then leave you with a bill of 36 euros.

In Germany, Supercharger rates are climbing to 69 to 71 cents per kilowatt hour, according to Teslamag. The previous prices of 56 to 58 cents per kWh have been effective since May. That represents a premium of about 23 per cent. Compared to the 0.37 euros/kWh charged until August 2021, the current rates of up to 71 cents represent a price increase of almost 92 per cent.

At the same time, the price for third-party electric cars at the Supercharger rose to 80 to 82 cents, up from 70 to 71 cents previously. With a monthly subscription of 12.99 euros, third-party chargers can also reduce kWh prices to roughly the same level as Tesla vehicles.

Unlike previous price increases, Tesla sent an email to its European customers to alert them to the steep rise in charging prices. “Due to increased energy prices, we are adjusting Supercharging prices across Europe,” it reads.

Tesla is not alone on this route. At the end of last week, for example, Allego and Shell Recharge had raised their charges, which will apply from 7 October (Allego) to the end of September (Shell Recharge). Allego will charge up to 80 cents per kWh in Germany in the future.

As for Tesla, the company will eventually roll out more V4 Supercharger stations incorporating solar and energy storage, which may help stabilise prices eventually.

Nikola Motor & E.ON team up on H2 refuelling in Europe

Engie to install thousands of charge points in Belgium & France