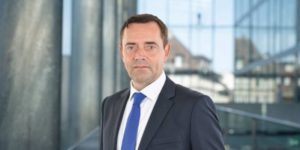 France’s Bolloré Group has appointed former ZF and Valeo manager Richard Bouveret as the new CEO of its battery and electric bus businesses. He has headed the Group’s eMobility activities, which include the Blue Solutions, Blue Storage and BlueBus subsidiaries, since 1 September.

Bouveret thus replaces Jean-Luc Monfort, who is retiring. Richard Bouveret will report directly to Cyrille Bolloré, CEO of the Bolloré Group, and work closely with Fabricio Protti, the Group’s deputy CEO. Read our in-depth interview with Monfort about the company’s solid-state batteries here.

An engineering graduate with a master’s degree in metallurgy, Monfort had been with Valeo for nearly 17 years, working his way up to Vice President. In 2018, he moved to ZF Group as senior vice president, where he served until this year. This gives Bouveret many years of experience with Tier 1 suppliers. His new employer credits the manager with having developed numerous technology strategies at Valeo and ZF and having led several acquisitions.

With his arrival at the Bolloré Group, the company is also reorganizing its activities around electromobility. In doing so, Bolloré aims to better address the challenges and opportunities of e-mobility and the energy transition. Bolloré is one of the few companies that already builds solid-state batteries in series production – as reported, these are used in the Mercedes eCitaro, among other vehicles.

“Richard’s personal and professional qualities embody the renewed and strong ambitions of Bolloré Group in the e-mobility sector,” says Fabricio Protti “Bolloré Group is the pioneer in the development and the mass production of all-solid-state batteries and intends to continue leading this technology towards multiple applications in the future. Richard’s extensive experience will be a remarkable asset for the Group.”

The deputy CEO also thanked Bouveret’s predecessor, Monfort. “We would like to take this opportunity to thank Jean-Luc Monfort, who has decided to retire, for his incredible work and achievements within our industrial division for more than 20 years,” Protti continued. “We wish him to fully enjoy his retirement.”